We were extremely fortunate to be able to have a Solemn High Mass for Palm Sunday. The Palm Sunday liturgy isn't for the faint-hearted, though - with the blessing of palms, the outdoor procession and the chanting of the St. Matthew Passion it is just over two and a half hours long. It's such an amazing visual and aural feast that it doesn't feel like it's that long, but it does require some advance planning for lunch...

The photos are just a little late in getting uploaded - actually, I did upload them a few days ago, but needed the Senior MC to check my descriptions. Using two cameras, one on BST and one on GMT, meant that the photo order got a little muddled. However, you can see a few more over on my Flickr page.
Posted by Mulier Fortis on 7.4.12 2 comments: 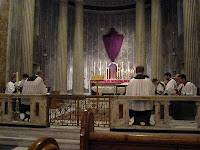 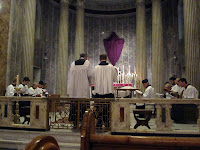 
It was definitely the best way to start the Triduum... Perhaps one year we can celebrate it at Blackfen!
Posted by Mulier Fortis on 5.4.12 3 comments: 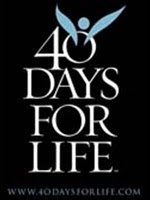 I haven't been blogging very frequently and, although I thought I had mentioned the 40 Days for Life campaign this year, it seems to have slipped by without comment on my blog, which is annoying. I had meant to say something!

Then followed a lot of negative press given to the Vigil, particularly when Bishop Alan Hopes indicated that he would attend in order to lead the Rosary. One comment from the pro-abortion crowd really had me scratching my head in perplexity - apparently "Bishops have no business moralising about abortion..." Actually, they do, that is the main business of a shepherd, to warn the sheep when they are going off in the wrong direction, to protect them...

Not having said anything to that point, I initially decided to stay quiet, especially as I hadn't been there for the "showdown" on Friday, when the counter-demonstration happened. I understand that there was controversy over filming on a previous occasion, which some people had found intimidating. I agree wholeheartedly that filming women going in to the clinics is completely wrong. However, filming the people praying in the vigils has actually been beneficial in the past, to guard against false accusations of intimidatory behaviour. Remember the landlord of the abortion clinic who came out brandishing a chainsaw? In addition, the whipping-up of the anti-Vigil demonstration started well before the cameraman incident, in fact, it started as soon as Bishop Hopes' presence was announced. One lone cameraman filming on one occasion was a convenient excuse, not a cause.

I've spoken to people who were actually present at the Vigil on Friday. One of the most rational accounts I have read is that of Leutgeb over on Bara Brith, and I have a great deal of respect for her common-sense approach to life, so it's her report which carries most weight with me.

But the final thing which made me break silence is the fact that, arousing such vehement responses from the pro-abortion camp, suggests that the 40 Days for Life vigils are having an effect. There wouldn't have been the need to protest against some religious nutcases standing on street corners if that was all they were. Rather inconveniently, the people attending the vigils are just ordinary people, men and women, young and old. In fact, the very violence of the response indicates to me that the truth pro-life message is slowly trickling through, aided by ultrasound images of the unborn child which make it impossible to pretend that abortion is just the removal of an inconvenient blob of tissue.

So, even if mistakes were made (we are merely human, after all), the 40 Days for Life endeavour deserves praise and encouragement for the good which has been achieved so far.
Posted by Mulier Fortis on 5.4.12 No comments: