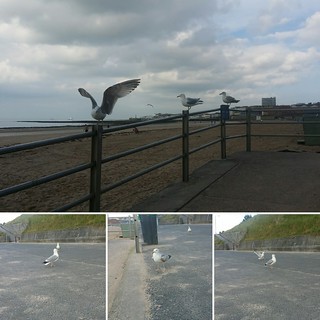 I've been spending more time on the beach with my feathered friends. They really are amazing. I went and sat on the beach, not a bird visible in the sky, and threw out some small pieces of bread. Within a few minutes, a whole load of eager gulls were wheeling around me.

It was a bit reminiscent of that Hitchcock classic, The Birds.

The gulls were, however, all very well-behaved towards me - even though they did have a few squabbles among themselves. It seemed to be a territorial thing - there was much chasing and squawking by some birds who also appeared to let certain others go and eat without protest - but I don't know enough about gull behaviour to interpret it.

I am unsure why "birdbrain" is such an insult - the gulls appeared pretty smart to me. Once the bag containing the bread scraps had been put into my pocket I was no longer of any interest, and they rapidly abandoned me.

But today I was feeling distinctly birdbrained. Arriving home from work, I walked directly from my car to the polling station. Standing in the queue, I realised, to my horror, that I couldn't remember my house number. Arriving at the desk, I had a sudden flash of inspiration, and I gave my address in a confident voice.

I had given the wrong street name!
Posted by Mulier Fortis on 23.6.16 4 comments: