When St. Bernadette was a baby, she had to have a wet-nurse for a while, as her own mother was unable to breastfeed her after being badly burned in an accident. Later on, when the family were suffering dire financial hardships, Bernadette was sent back to her former foster-mother, partly to reduce the number of mouths to feed in the family, and partly so that she could benefit from good food and clean air.

Bernadette was to work for Marie Laguës, looking after the sheep and helping with Marie's own children, and, in return, Marie promised to allow Bernadette to attend school and help her learn her catechism so she could make her First Holy Communion. Bernadette's ill health following a cholera outbreak and her family's poverty had prevented her from attending school in Lourdes, and so, at the age of 13, she was still unable to read or write.

With all the work she was expected to do, Bernadette never got the chance to attend classes in Bartrès, despite the assurances which had been given. Marie herself didn't have much patience, and St. Bernadette found it difficult to learn her catechism. When the priest at Bartrès announced that he was leaving to enter religious life in a monastery, Bernadette realised that she had no chance of making her First Holy Communion if she remained at Bartrès, and she decided to return to the family home in Lourdes. Three weeks later, St. Bernadette saw Our Lady for the first time at the Grotto of Massabielle... 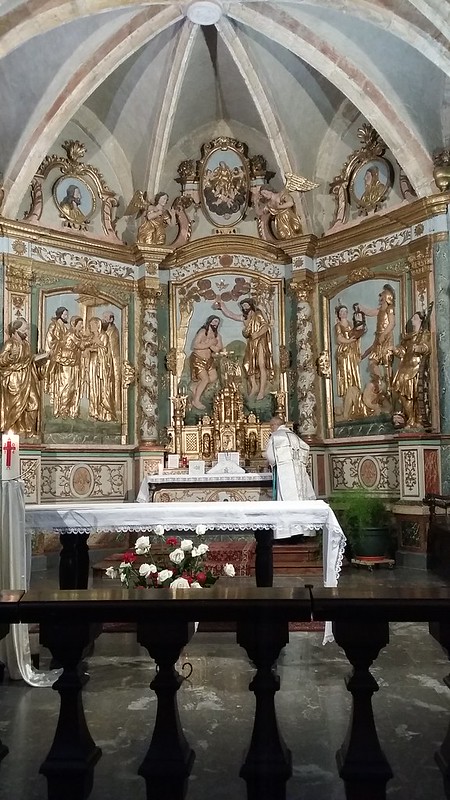 We were very privileged to be able to visit the parish church at Bartrès this morning, and to celebrate Mass according to the usus antiquior, the form which St. Bernadette would have experienced. The High Altar is basically the same as the one Bernadette knew, as is the tryptich of St. John the Baptist, but the church was just the single nave. 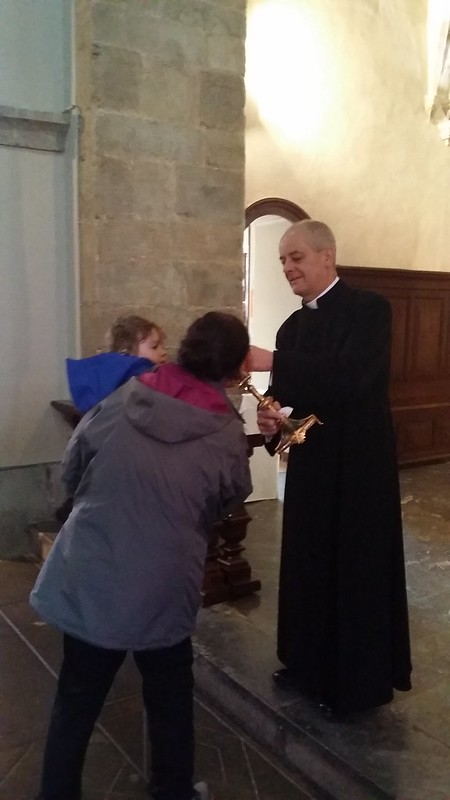 After Mass we were able to venerate a relic of St. Bernadette, and to see an example of her handwriting practice from when she was learning to write... 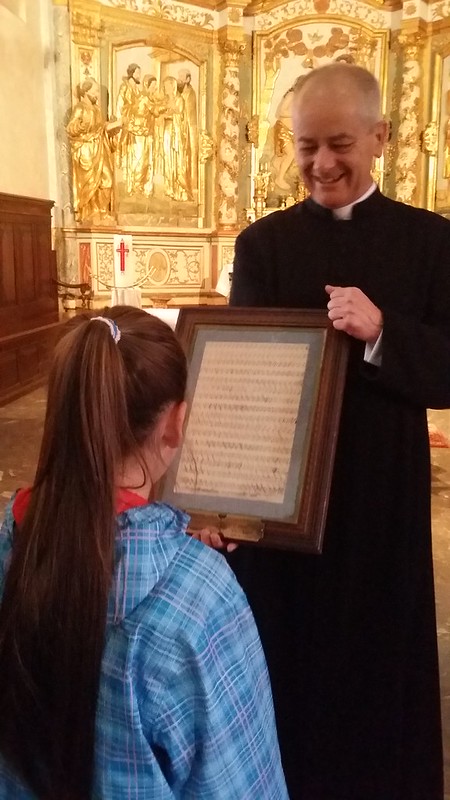 Sadly, the farmhouse where St. Bernadette stayed with the Laguës family was closed. I assume that they don't usually get many visitors on a Wednesday morning, as that is when the International Mass is celebrated in the Pius X Underground Basilica, and the vast majority of organised groups attend. However, I did remember that the stream where the village women would gather to wash clothes was around the corner, so we went along to have a look... 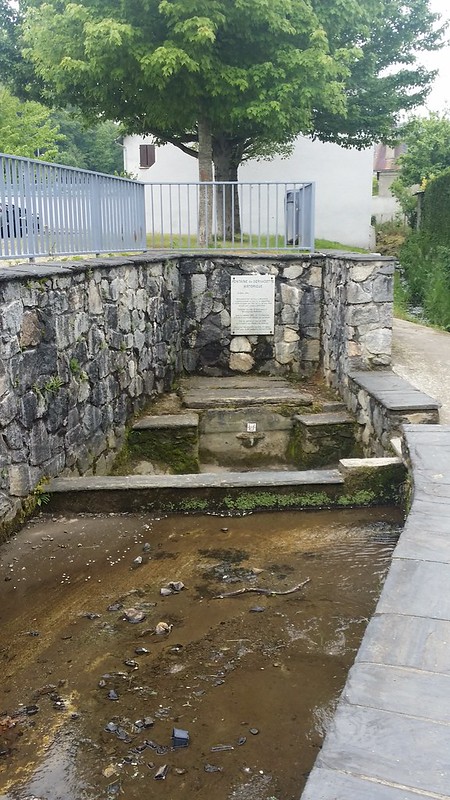 Our hotel, the Grand Hotel d'Angleterre, is a favourite with many pilgrimage groups. The Birmingham Diocesan Pilgrimage occurs during the May half term week, and over the years we have bumped into many regulars who are staying at the hotel.

One of the priests we regularly meet is Fr. Paul Devaney. This year he is celebrating his Golden Jubilee of priestly Ordination, and tonight at dinner there was a little celebration. Archbishop Bernard Longley came over for dinner, a cake was brought out, and, after we sang a rousing chorus of "For he's a jolly good fellow", all the priests present launched into a very moving rendition of "Ad multos annos" the anthem traditionally sung for a priestly anniversary. His Grace gave a lovely speech and pointed out that he and Fr. Tim had sung together in the schola at Wonersh.

Never one to miss a photo opportunity, I asked the Archbishop if I could take a photo for the blog... 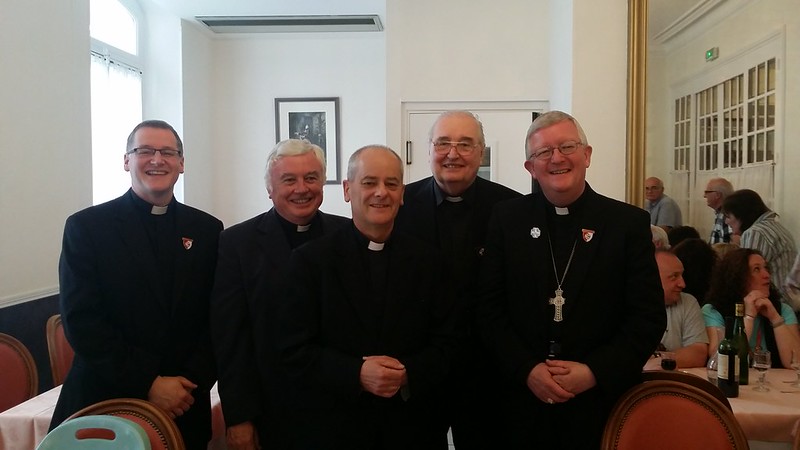 I was surprised to find that His Grace knew of my blog... and especially the exploits of my two cats. He was keen to tell me about the famous Birmingham Oratory cat, Pushkin, who, since his meeting with the Holy Father, Pope Benedict, has been seen sporting a red biretta and a (small) red cape. No doubt Cardinal Furretti will be having words with me about the paucity of her own ecclesial apparel... I will probably have to invest in a cappa magna and lace rochet just to keep the fur from flying...
Posted by Mulier Fortis on 27.5.14 1 comment:

In the Footsteps of Bernadette...

We started the second day of our pilgrimage with a guided tour of the main sites in the town associated with St. Bernadette. It is a while since I have done this tour, and I particularly wanted to get some new photos, so, mindful of the fact that my knees and ankles are getting worse - which means that I may not be capable of navigating the hills and cobbles for much longer - I made a bit more of an effort this morning.

After meeting at the Information Office and registering our group, we were teamed up with a group from Grimsby. We went first to the Museum of St. Bernadette to get a brief overview of her life and the Apparitions. They have a model of the way the grotto looked and its relation to the town which helped me to picture the whole scene... 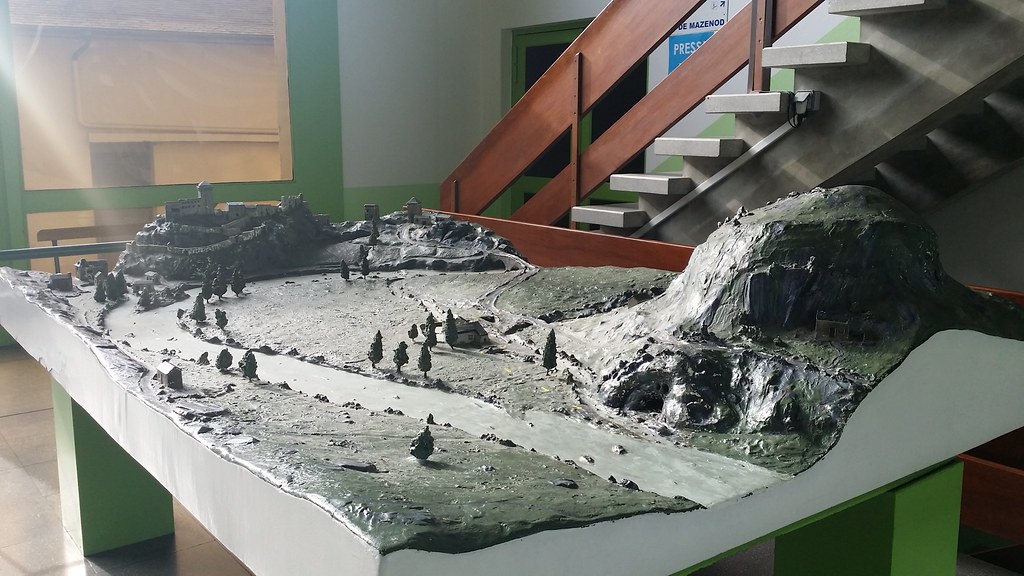 Next we made our way to the Boly Mill where Bernadette was born, and spent the first 10 years of her life. The time spent here was a time of happiness for the Soubirous family... 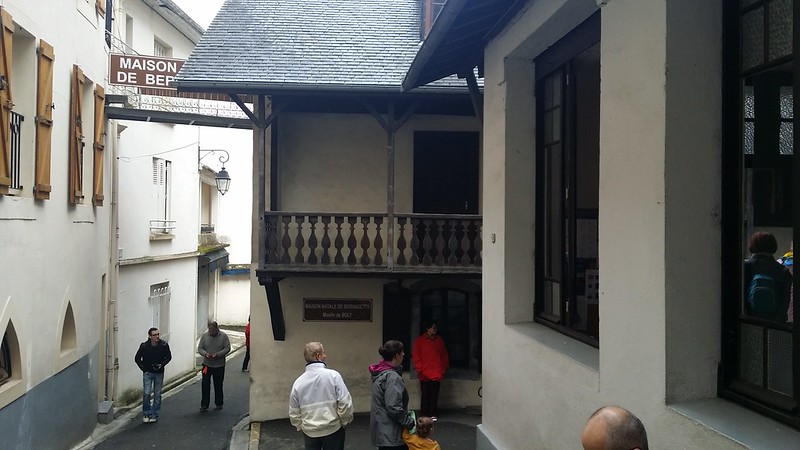 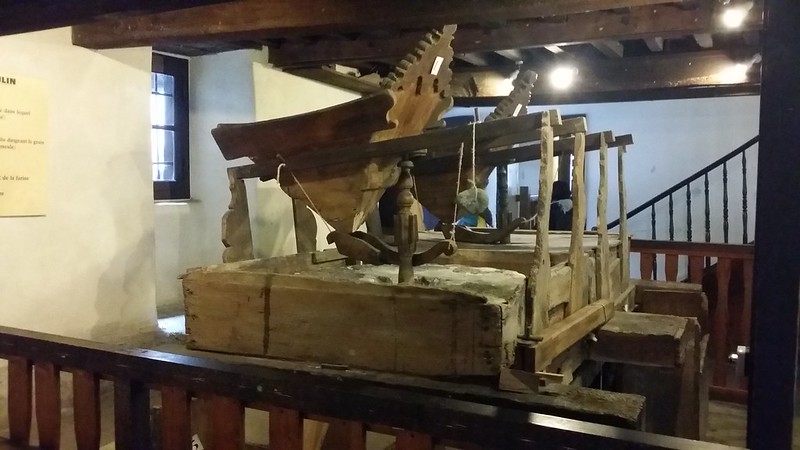 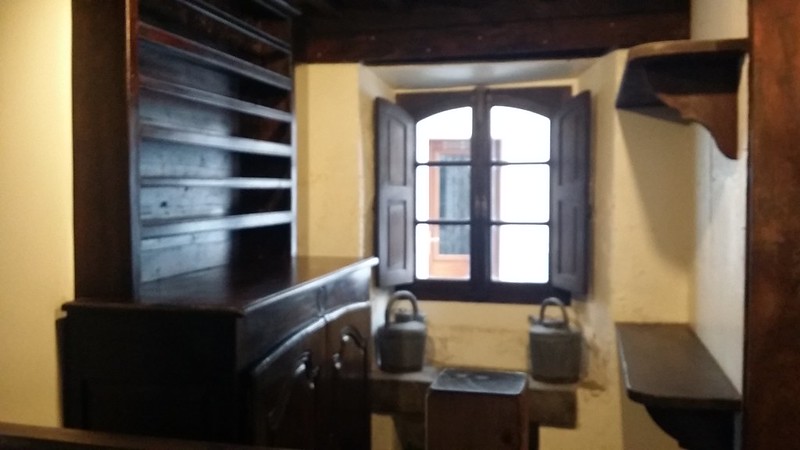 A combination of factors led to the family suffering financial difficulties - in particular the generosity of the family towards the poor, and their reluctance to press for payment of debts. The situation was compounded by a famine in the area, during which the government distributed free flour, thus bankrupting Bernadette's father. The family was evicted from the Mill, and eventually became so poor that the only refuge they could find was the Cachot - the old jail which had been condemned as too unhealthy a place to house criminals. 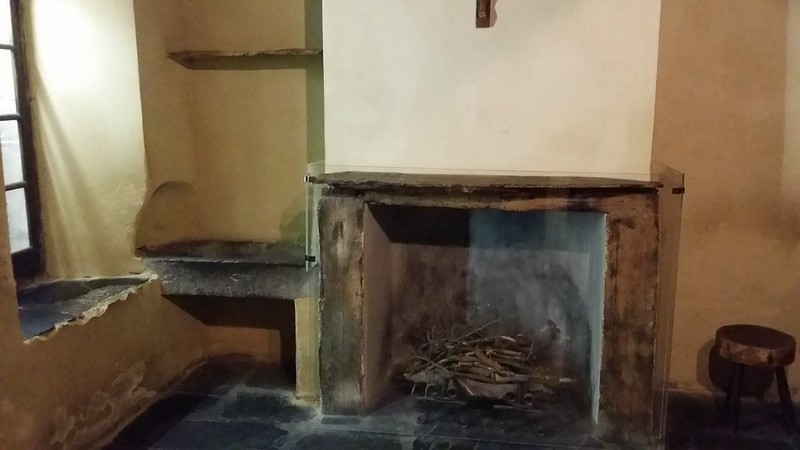 En route to the Cachot we passed the house bought for the family by the bishop after Bernadette had gone to the convent at Nevers... 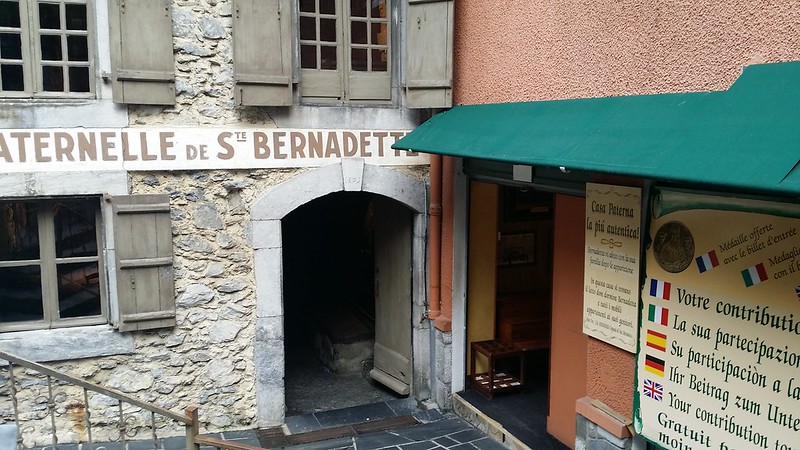 We ended the tour with a visit to the parish church. It isn't the one which existed at the time of St. Bernadette - that burned down - but it does still have the Baptismal font where St. Bernadette was baptised. Unfortunately there was a Mass being celebrated, so we couldn't have much of a look round... 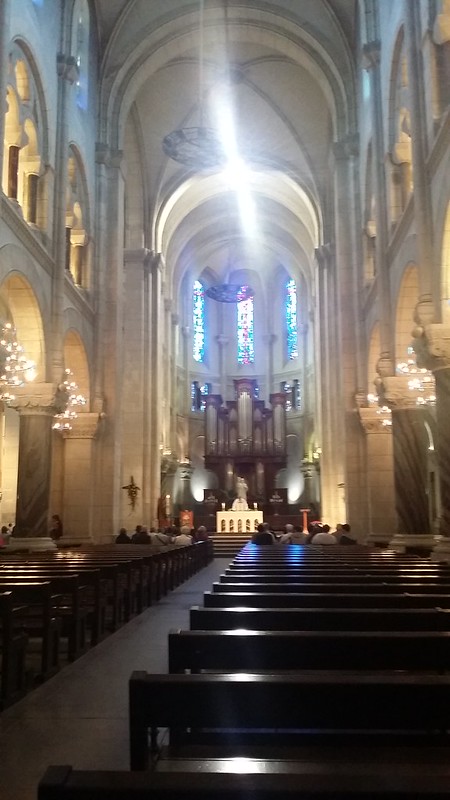 I did manage to get our group to pose in front of the statue of Dean Peyremale (one of Fr. Tim's heroes, I think.) 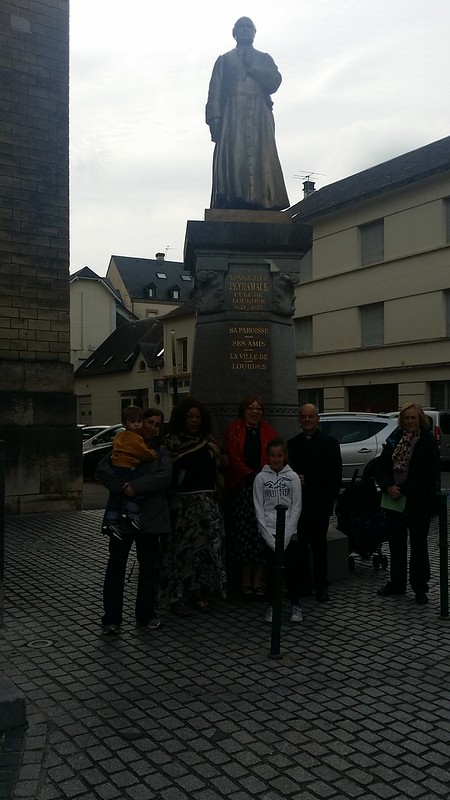 The tour guide indicated that the last place we were due to visit was the English Bookshop, where we would be given coffee. None of our group was keen on the idea and so we finished the tour here. I was starting to feel the effects of the hills and cobbles (I think my Guardian Angel had been working overtime up to that point, pushing me up the hills to ensure that I didn't give up!) and I returned to our hotel for a short rest before lunch...

There are a few more photos from the tour and the rest of Day 2 on my Flickr page.

The Blackfen pilgrimage started this morning with Low Mass at the Lady Altar. Annie Elizabeth's eldest son kindly gave up the opportunity to have a Bank Holiday Monday lie-in and served the Mass... this was after a Sunday where, at the ripe old age of 12, he MC'd the Sunday Missa Cantata, served two consecutive Baptisms and then served Mass for Fr. Michael Mary of the Transalpine Redemptorists who happened to have dropped by with Brother Martin for a visit. Give that young man a medal...

The pilgrimage group is very small this year - several people expressed an interest, but then pulled out. However, I think I've managed to get a good programme of events lined up. We don't have a server, unless someone happens to materialise, so it will be Low Mass each day, but the silence and stillness of Low Mass has a special charm once you get to appreciate that silence doesn't mean "doing nothing!"

The journey by minibus from Blackfen to Heathrow was uneventful, and the Groups check-in at Terminal 5 was wonderfully smooth. Security was a bit of a pain - taking laptops and kindles out of bags when the bags are being x-rayed anyway seems a little excessive - but there was still time for people to go and get lunch or do a little shopping.

British Airways are very civilized about seat allocations, so we didn't have a mad scramble, and the flight was pretty straightforward - even the turbulence announced by the captain didn't disturb my gin and tonic. Once at Toulouse we were met by another driver who had been sent to collect us. Rush hour traffic in Toulouse is no joke, but once we were in the suburbs it was all plain sailing. I was able to put my mobile phone camera through its paces, and was delighted to find that it coped really well with the rapidly-moving landscape - I am even more impressed by the phone's capabilities than before! 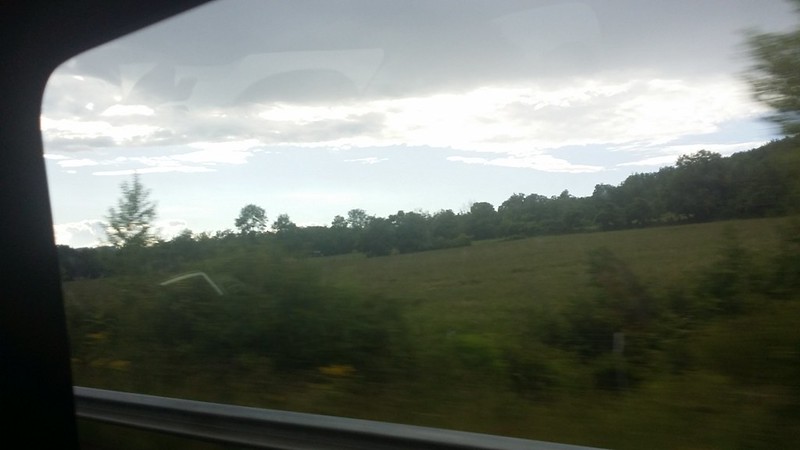 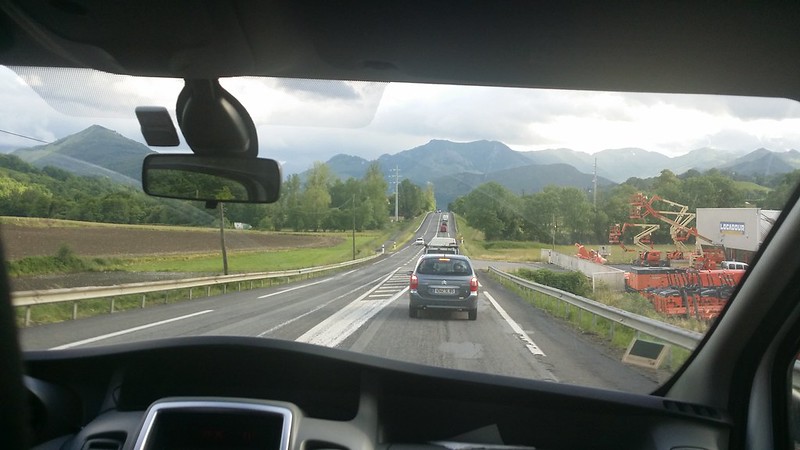 Dinner was waiting for us in the hotel when we arrived. The hotel is lovely - it reminds me of an Agatha Christie novel (minus the bodies and the Belgian detective) and I wanted to get some new photos on my phone camera. My knee and ankle are playing up - a combination of travel and rather wet weather - so I thought I'd skip tonight's Torchlight Procession, and I'm now enjoying a cup of gorgeous hot chocolate before retiring. 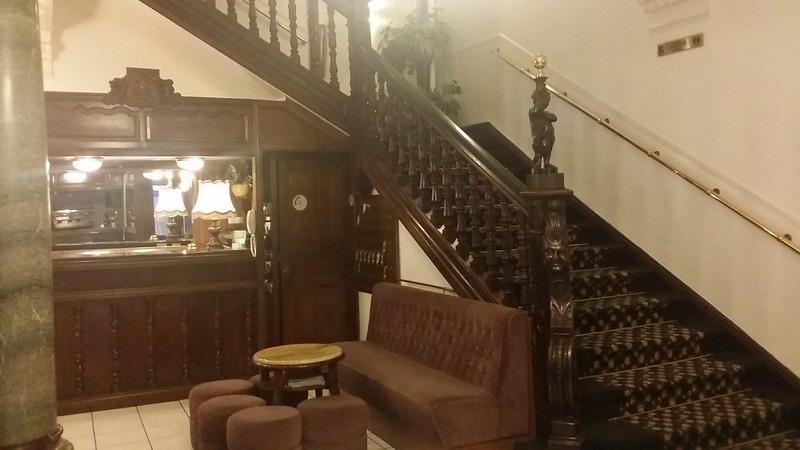 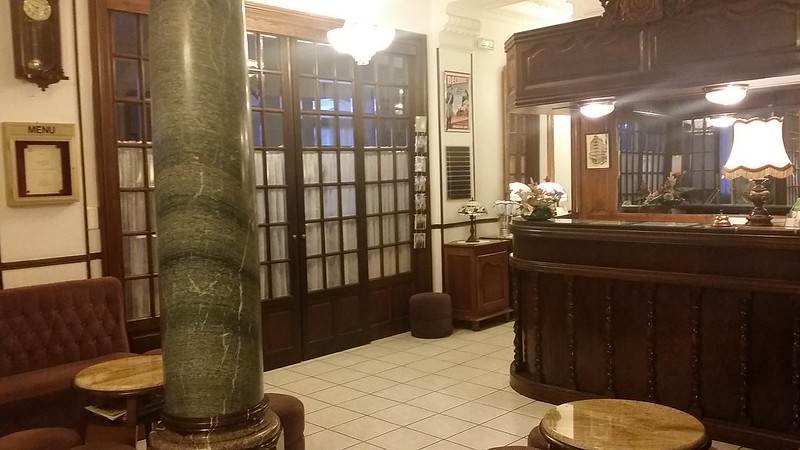 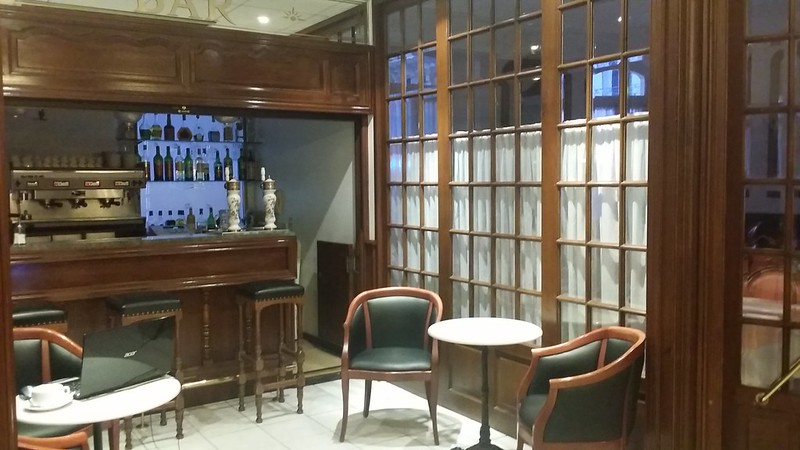 I've brought the laptop and so plan to blog about each day's activities. If anyone is in Lourdes and wants to join us for Mass, tomorrow it is in the Jeanne d'Arc Chapel (in the Upper Basilica) at 3pm.

And in case anyone is around, on Wednesday morning we will be in Bartrès for Mass in the parish church at 10am...
Posted by Mulier Fortis on 26.5.14 1 comment: