This is the sort of thing my two get up to, but never when I've got my camera handy. The expression on the cat's face is really priceless. 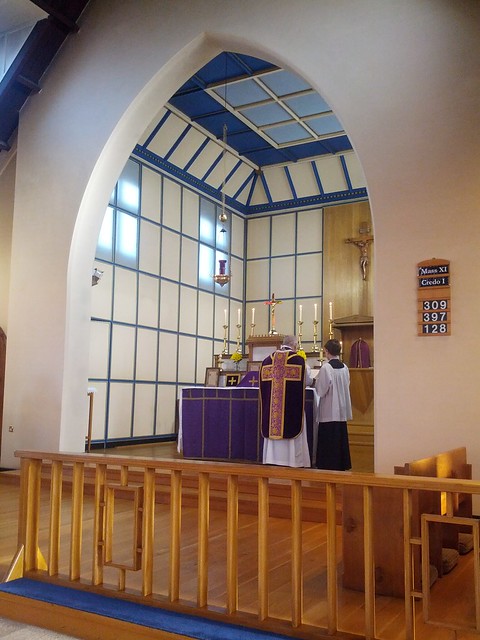 There's only a week to go before Lent (I'm a little late in posting this!) but at least, due to the old calendar, Ash Wednesday won't catch me unawares...
Posted by Mulier Fortis on 11.2.15 1 comment:

Kitty-watching can be most entertaining at times.

Miaowrini has been using the cat bed on top of one of the wardrobes for quite some time, but suddenly it's being taken over by Furretti. On finding her spot occupied the other day, Miaowrini looked a little forlorn, so I fetched a second cat bed and placed it on a trolley at the foot of my bed (not quite such a good location as the first bed, it would seem). After a little while, Miaowrini made herself comfortable, with all the circling, paw-kneading and purring which she used to carry out in her previous spot. And then she appeared to go to sleep.

Five minutes later, Furretti got up to go to the kitchen and munch some cat biscuits.

Quick as a flash, Miaowrini jumped down from her bed, scooted across the room and jumped up to the wardrobe. In less than a minute, she had settled down again to sleep, this time in her favourite spot.

Furretti returned, found that she had been supplanted, and retired to the sitting room in a huff.

Possession, it would seem, is nine points of the law for cats as well as humans...
Posted by Mulier Fortis on 10.2.15 1 comment: