Yippee! I was just thinking that we were well-overdue for a blognic. The next meeting of the Guild of Blessed Titus Brandsma is on Saturday 30th November at Our Lady of the Rosary, Blackfen. It's open to anyone who uses the new media - so that means people who comment on and read blogs, as well as bloggers, twitterers and Facebookers. 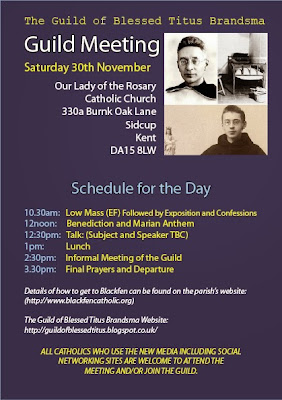 There is an online survey on same-sex "marriage," contraception and divorce being promoted by the Bishops of England & Wales.

Leaving aside the whole question of whether the Bishops should consult the Laity on a matter of faith and morals (the Church is not a democracy, and Truth is not subject to a majority vote!) I was intrigued to notice the language used in the survey.

In the past, when considering the motives of the members of our Bishops' Conference, I may have been less than charitable. I have decided to turn over a new leaf, and try and think of the most charitable explanation that I can come up with. So, this is my theory...

There were no sudden deaths or even major injuries sustained due to the implementation of the corrected ICEL translation of the Mass, despite the use of tricky words such as "chalice" or "gibbet." The Bishops of England and Wales were so encouraged by this indication of academic excellence from the average man person in the pew that they decided that we could all understand tricky words after all, and proceeded to use a few more of them...

"Describe how the Catholic Church's teachings on the value of the family contained in the Bible, Gaudium et Spes, Familiaris Consortio and other documents of the post-conciliar Magisterium is understood by people today?"

"What anthropological ideas underlie the discussion on the natural basis of the family?"

"In what way have the local Churches and movements on family spirituality been able to create ways of acting which are exemplary?"

"Is cohabitation ad experimentum a pastoral reality in your particular Church? Can you approximate a percentage?"

I will firmly resist all temptations to speculate that, by wording the consultation questionnaire in such a manner, their Lordships are hoping to skew the responses in any way. That would be most uncharitable of me, and, as I said earlier, I am attempting to turn over a new leaf.

And if you believe that, then there is a bridge I'd like to sell you...

On a more serious note, I think it is important that as many faithful Catholics as possible do respond to the survey. If you can't bear the online form option, then it is possible to download the Response Proforma as a Word document and send it as an attachment to Elizabeth Davies.
Posted by Mulier Fortis on 1.11.13 3 comments:

Liturgy At Blackfen For Halloween...

Well, actually it's for All Hallows' Eve - in other words, First Vespers of the Feast of All Saints. Sung Vespers (Extraordinary Form), followed by Benediction. We start at 8pm. Directions to the church can be found here.
Posted by Mulier Fortis on 29.10.13 No comments:

A new blog has started up. I have no idea how well-informed British Catholic is - he claims to be "in the know" and also that he only blogs from things he knows first-hand, and not gossip or speculation. The information on his profile page says that he is in the field of education. The speculation is therefore on my side...

The blog does make for interesting reading... particularly with regard to the delay in episcopal appointments in the United Kingdom. One to keep an eye on, I think...
Posted by Mulier Fortis on 29.10.13 1 comment: