Complementarity Of The Sexes...

I have argued for many years against the prevalent wisdom of the day which declares that equality of the sexes means that they are the same. As a teacher, I have had plenty of opportunity to observe differences in the attitudes (and aptitudes) of the boys and girls I teach, and, while recognising that there is a "nurture" effect, I also note plenty of evidence in support of the argument that men and women are very different by nature. Dr. Joseph Shaw has an excellent article on how the sexes complement each other.

The truth of this is recognised even in the sporting arena - there are very few sports where men and women compete on totally equal terms - men's tennis matches, for example, are longer, and you don't have men and women on the same football team... or, if you do, this is very much the exception to the rule, and the women concerned have had to work very hard indeed to overcome any disadvantages they have due to the differences in muscle mass.

I got to see this difference in ability in action yesterday and this morning. One of my friends is in the process of moving house, and I'm preparing to look after her four cats for a week (my chance to be a true mad cat-lady.) In order to prepare my two for the invasion, we thought it would help to get the cat tree installed first, so that strange smells could be explored before the arrival of strange bodies.

My friend arrived yesterday evening. Her husband had dismantled the cat tree prior to loading it in the car. This meant that my friend had no idea of the best way to reassemble the tree. Checking out pictures of the assembled tree on the internet didn't help. After an hour, she decided to give up. The tree was not designed to be dismantled and reassembled. We also didn't have an allen key. She considered taking all the bits home, but, on talking to her husband on the phone, decided to leave the bits here for her husband to sort out in the morning...

This morning, her husband arrived. Within ten minutes the bits had been arranged into their correct positions, and the whole thing fully assembled after another ten minutes. Admittedly, he did have an allen key, but I think it was only used on one bit...
Posted by Mulier Fortis on 6.12.14 3 comments:

An Advent Wreath For The Blog...

It's that time of year. The Curt Jester has performed his usual act of kindness in posting the code for his Advent Wreath gif so that anyone who wants to have an animated wreath can help themselves. He will replace the gif each week to ensure that the correct candles are lit, and there will be a Christmas message in due course...

Many thanks for this kindness, Jeff!
Posted by Mulier Fortis on 1.12.14 No comments:

The Season Of Advent Begins... 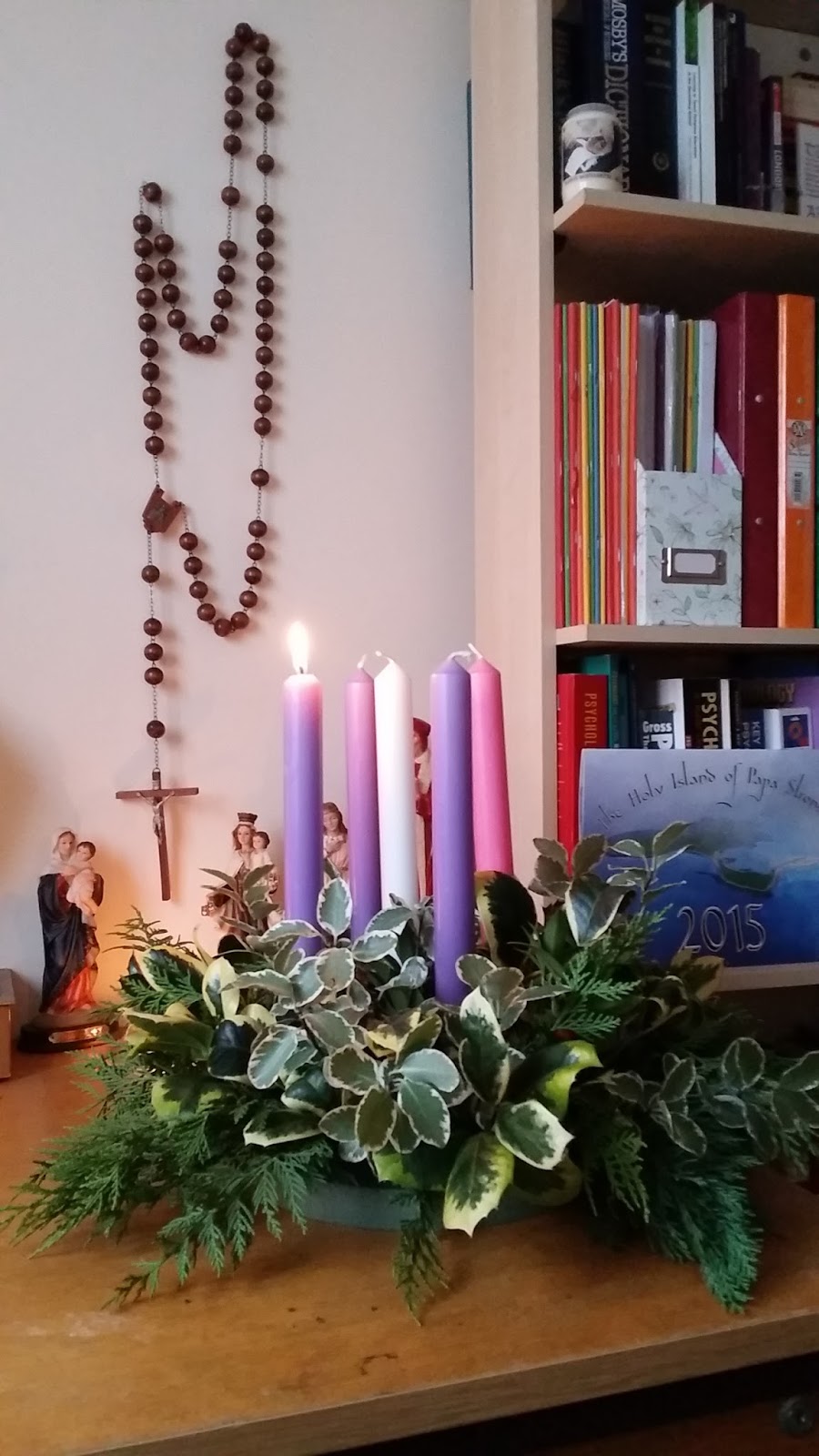 For the first time in four years I have a real Advent Wreath. This is partly because, after my clear-out over the Summer, I have an oratory. It seems fitting to reflect the liturgical seasons in the decorations as well as in the prayers. It struck me that the use of real evergreen makes a tangible difference (I had artificial wreaths before), and it made me reflect once more on the importance of physical elements of our worship - we are both matter and spirit.

I was a little unsure as to the wisdom of having real greenery, but, as the cats don't spend much time in the oratory in my absence, I thought I'd risk it. On Sunday morning, I discovered that one (or both) of the little darlings had succeeded in pulling out a large bit of fern from the oasis, but it seems not to have tasted very good, and has since been left alone. 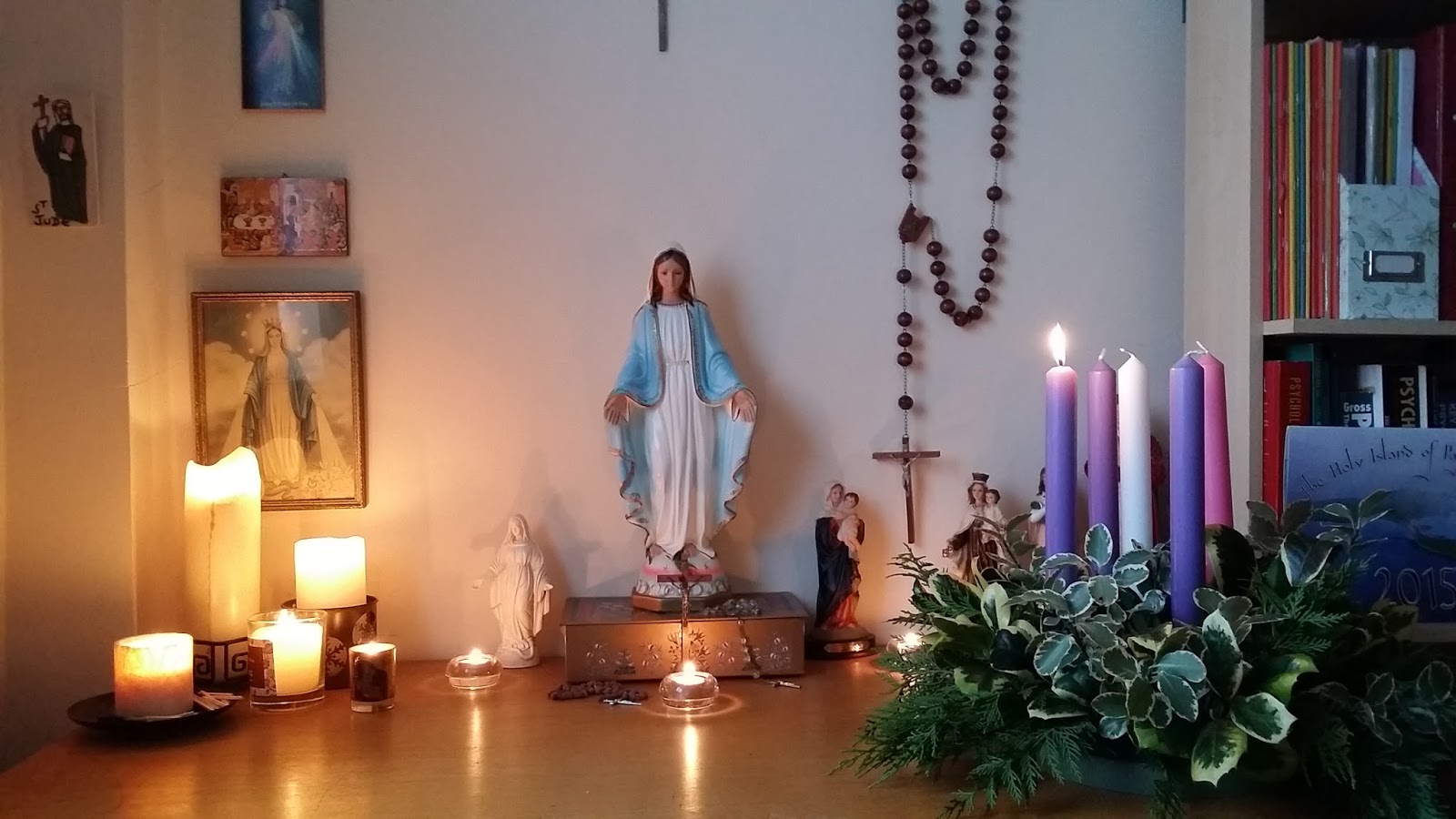