Singulare Ingenium is a blog concerned with all things to do with Tolkien (though not exclusively so) and is well worth adding to your blogroll. Pop on over and say hello... and tell him I sent you!
Posted by Mulier Fortis on 9.5.09 2 comments:

The Society of St. Catherine of Siena doesn't usually get to hold their Annual Mass on the actual feast day of St. Catherine because the Mass is organised around the diary of the chairman, Bishop Malcolm McMahon. This year, the Annual Mass was a week after the feast itself, which made it rather like celebrating the Octave Day.
The Solemn Pontifical Mass was held in the conventual chapel of the Knights of Malta at the Hospital of Saint John & St. Elizabeth, St. John's Wood.
I've been feeling rather tired and washed-out of late, and so very nearly didn't go: I'd only been to St. John's Wood once or twice before, by tube, but the effort involved in negotiating public transport was just too much to contemplate. I checked out the route on Google Maps, and realised that it was a pretty straightforward drive, and so, having programmed the sat-nav on my phone, I set out.
The chapel itself is amazing. It is not the usual hospital chapel, and there is a curious tardis-like experience on entering from the hospital corridor: the huge marble columns would not be out of place in a Roman basilica.
Anyway, I managed to get a place at the front (most un-Catholic behaviour, I know, but I don't think it is enough to get me classed as a heretic!) and promptly whipped out my phone to take photos.
The Mass itself was awesome (as ever!) The silence during the Canon gave me goosebumps - this silence was amazing given that the marble makes it quite a noisy chapel. Boys from the London Oratory school came to sing the Mass; I don't know what settings they sang, but the music was beautiful...
Unfortunately, the low light levels meant that the phone camera took absolutely ages to focus, and so I completely missed the Consecration shots which look so very impressive. Still, the photos which I did manage to get don't look too shabby... 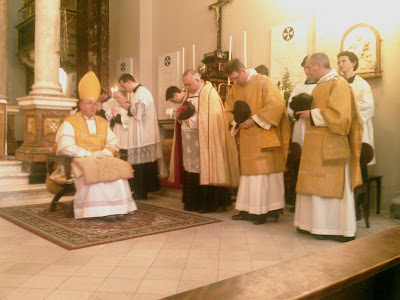 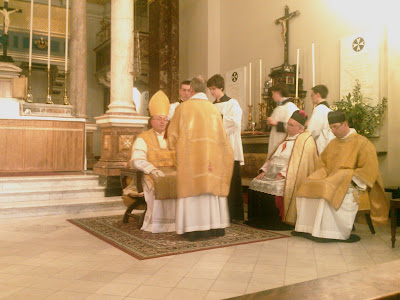 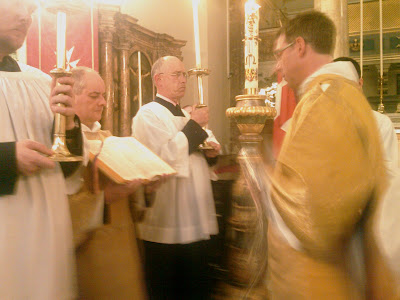 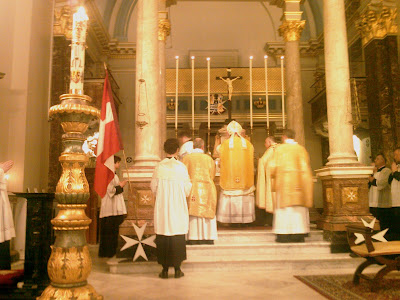 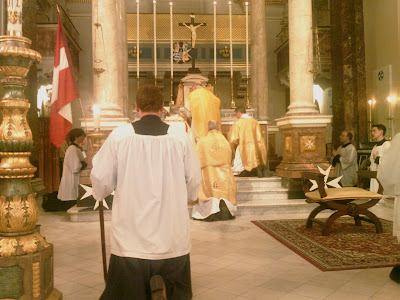 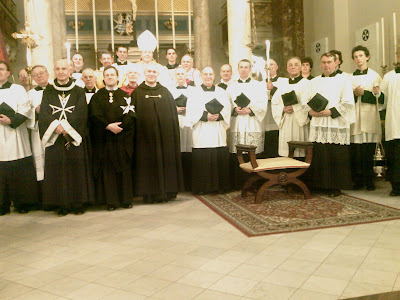 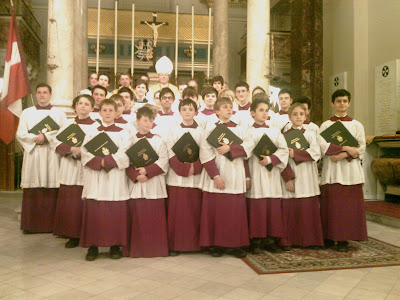 On The Subject Of Swine Flu...

Melancholicus has a helpful hint on what not to do... though the picture is just too good to leave it on his blog, so I'm snaffling it here... My gecko-owning friend also told me that her father had phoned the NHS Swine Flu information line... but all he got was some crackling...
Posted by Mulier Fortis on 7.5.09 3 comments:

You Learn Something New Every Day...

I visited some friends yesterday evening, and was promptly grilled by the youngest family member as to the nature of my favourite pet, not including cats. This had me stumped for a minute. After admitting that rats (nice, clean, laboratory-reared rats) were my second favourite, the interrogation moved to the subject of geckos (my interrogator's favourite, I think...)
I had to admit that I had never actually "met" a gecko. I'd seen pictures, I'd seen them on TV, but I'd never seen one "in the flesh" so to speak.
This gap in my knowledge was hastily remedied... I was promptly introduced to "Poppy" (so called because the spots on her back looked like poppy seeds) and was allowed to take photos for the blog. I must say that geckos are rather beautiful to look at... 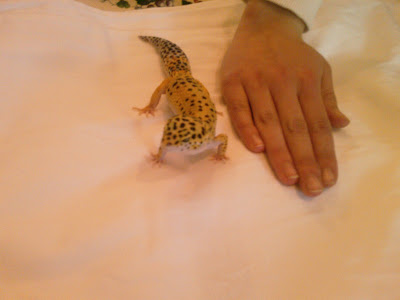 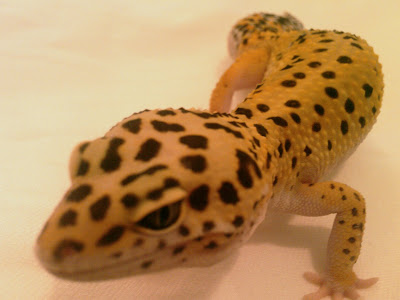 The British Government wants to bring in ID cards. Initially, it would have been compulsory to have a card (and to pay for the privilege) but the Home Office are now saying that it's going to be optional (for how long?) The scheme was also going to be running by 2008... but now people are talking about 2010 for pilot schemes and 2011/2012 for the real thing. And data will be held in three different databases, partly because the cost of a cental database would be too high, and partly because this Government have proved to be so totally inept at handling data securely.
I have to confess that I'm confused by the need for ID cards. We already have passports, drivers' licenses, national insurance numbers, (allocated at age 16, I think) national health numbers (allocated at birth - at least mine is related to the number on my birth certificate) council tax documentation, electoral roll data...
I do not understand how these cars will reduce fraud, illegal immigration or terrorism.
The original idea was to have iris scan data for the cards. Too expensive, so it's been ditched. All it will now have is fingerprint data on a database... but there are no plans to give scanners for the cards to shops, banks, pubs or other commercial concerns. Instead there will be a "hotline" for people worried about fake cards.
So much for the fight against fraud... credit cards already use more technology than this with their chip-and-pin stuff... and that isn't foolproof. And cards can be cloned.
There isn't even a timetable for giving scanners to the police or to immigration officers...
There goes the illegal immigrants argument.
Which leaves the fight against terrorism. As if people born in this country aren't capable of committing acts of terrorism. And someone who wants to blow up other people, and doesn't mind dying in the process, is hardly going to worry about having a valid ID card. I suppose it might help to identify the dead...
Posted by Mulier Fortis on 6.5.09 3 comments:

This Made Me Laugh...

... unfortunately there is more than a grain of truth in it! 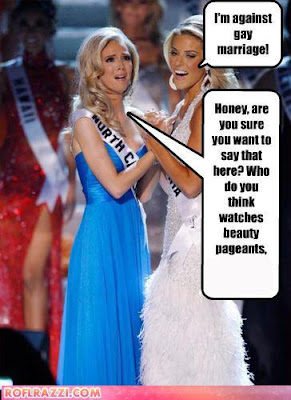 I thought I'd start a new series, to aid my fellow cat lovers... 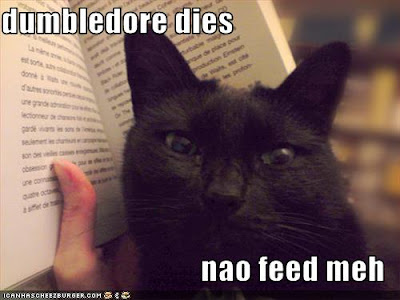 You must learn to recognise your cat's "feed-me-before-I-rip-off-your-face" look...
Posted by Mulier Fortis on 5.5.09 No comments:

I was checking out some of my previous posts, and I found this video, which I posted in 2007. I love the example of forward planning...
Posted by Mulier Fortis on 4.5.09 4 comments: 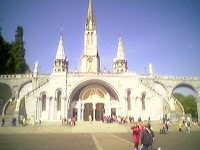 I'm busy organising the events for this year's Parish Pilgrimage to Lourdes. As I've explained before, we organise all the stuff ourselves, as this really cuts down the costs. It also means that we don't get stuck in some of the less attractive chapels - the Chapel of St. Patrick, for example, looks like a store-cupboard... albeit a large one.
The "Service Planification" ask smaller groups to wait until April before making booking requests, so that they can organise the larger diocesan and other pilgrimages. This seems fair enough, but time flies, and I have suddenly realised that May has started, and I haven't heard anything...
Ooops.
I sent another email today, and I shall telephone in a day or two if there's no reply.
Exploring the official Lourdes website, I saw that they have "upgraded" their video links to the Grotto. Previously, the links were actually small snippets of video coverage which were repeated after two or three minutes. Now there is live coverage of the Grotto: I've got the 3:30pm recitation of the Rosary going on in the background. The link needs to be refreshed after about 10 minutes for some reason. During the Rosary, the camera changes round to show different shots, but it seems to be fixed the rest of the time. 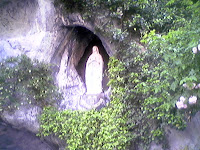 This gave me an idea. When we are in Lourdes, I'll go to the grotto at a certain time and wave in the direction of the main camera. I don't know what time yet - it depends on what else we're doing - but I'll post the time on the blog. If you watch the live link at that time, you'll get to see me (and maybe a few others on the pilgrimage!)
Watch this space for details. In the meantime, if you want to have a look at the link to the grotto, click here.
Posted by Mulier Fortis on 4.5.09 2 comments:

Time To Call In Some Favours...

Ok, people, listen up!
Terra, stop sulking, and stop trying to rig the voting along nationalistic lines. Ches, the commenting works just fine, so stop messing about... be sensible, there's a good chap. Leutgeb, take off that sling and get thee to a keyboard... no, not that sort of keyboard... the one attached to your computer. Paulinus, remember that rabbits are God's creatures too. And Ttony, if you have quite finished mooching about pre-Reformation churches...
If I now have your undivided attention? Are you sitting comfortably? Good.
The 2009 Cannonball Awards have opened for voting. Mulier Fortis (me!) is up for two awards: Snarkiest Catholic Blog and Best Under-Appreciated Catholic Blog. You have to be careful in the latter category, as I'm in the second set of blogs.
Well, don't just sit there... go and vote for me! I shall be checking that you've done your homework too...
Posted by Mulier Fortis on 4.5.09 8 comments: 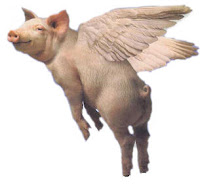 Ches at the Sensible Bond has an excellent post musing on the possibilities afforded by the Church relinquishing voluntary aided status of Catholic schools. He suggests, in other words, that the Church should withdraw funding and leave the State to get on with it. After all, with the National Curriculum and all the "compulsory" bits the Government wants to impose, the Church has precious little to say on the matter anyway. So, fine... if the Government wants it, let the Government pay for it... and for the buildings and the land the buildings are on...
For a start, he suggests, parents will be given back the responsibility for the religious education of their children...
So, how likely is that to happen?
Oh look up there: there's a 'flu carrier with wings...
Posted by Mulier Fortis on 3.5.09 3 comments: