Mass For The Election Of A Pope...

At Blackfen our monthly First Saturday Missa Cantata we celebrated the Mass for the Election of a Pope. This doesn't get celebrated very often - for obvious reasons - and the last Sede Vacante period occurred before I started blogging. We used our most beautiful red vestments; they are from a nineteenth century French set, with an exquisite embroidered Agnus Dei on the back.

Fr. Finigan's sermon at the Mass was a real wake-up call. It was a salutary reminder that we need to pray for the election of a good, wise and holy Pontiff, and not just sit back complacently to wait for the Holy Spirit to do it all. Yes, we need to trust that God will not leave us orphans - he has promised to be with his bride, the Church, until the end of time. But that trust must not be presumptuous  and we need to remember that God sometimes allows evil to happen; sometimes it is allowed as a punishment for our sins. There have been bad Popes in the past. As my friend Vox in Rama said, our failure to pray more fervently for Benedict XVI probably lead (indirectly) to his resignation.

It's a sobering thought.

If you haven't got a Cardinal to pray for during the Sede Vacante, you can get one here.
Posted by Mulier Fortis on 2.3.13 3 comments:

I knew that the Pope Emeritus loves cats - he used to go around feeding strays when he was a Cardinal - but I didn't realise that he actually had a cat with him in the Vatican .. I'm sure I read somewhere that cats weren't allowed in the Vatican.

It would appear that Benedict XVI has more than one cat... the report in the Chicago Tribune describes Contessina as one of the Pope's cats. I wonder how many there are?

Twitch of the mantilla to Lady Catcliffe for the information!
Posted by Mulier Fortis on 2.3.13 4 comments:

I saw this notice hanging in place of Benedict XVI's portrait in the Sacristy at Blackfen this evening, just before Rosary & Benediction. It brought a little lump to my throat...
Posted by Mulier Fortis on 28.2.13 2 comments: 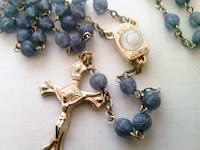 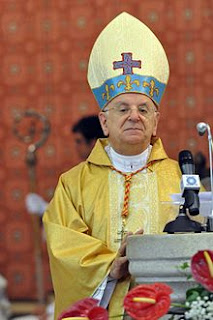 Over 80,000 people have adopted a Cardinal, and its comforting to think that each of the 115 electors will have nearly 700 people praying for him during the run-up to the Conclave (and during it, naturally, as well as for three days after the election!) Do go over and adopt your very own Cardinal!
Posted by Mulier Fortis on 27.2.13 8 comments:

The Attacks Increase In Force...

I hadn't intended to post anything about the scandal which has broken around Cardinal O'Brien, but during Mass this evening I became convinced that I needed to say something.

I get the distinct impression that the attacks on the Church are increasing in vitriol and fervour, and that things are building up to a crescendo. The attacks are not just from human agencies - the devil is throwing everything he has at the Bride of Christ.

First of all, the Cardinal is accused of "inappropriate behaviour". He has denied the accusations. The law of this land still (notionally) accepts the idea of "presumed innocent until proven guilty," hence the idea that the prosecution has to prove guilt, and not the defendant having to prove innocence. False accusations have been made against priests (and others) in the past. So we must bear in mind that these accusations may be a vile calumny against Cardinal O'Brien.

Next, even if the Cardinal is guilty, it must be noted that this "inappropriate behaviour" did not involve children. The people involved were adults. In addition, it seems (from the vague and sketchy report in The Observer) that alcohol was involved. Human beings often get into inappropriate sexual situations when alcohol is involved. It is hardly earth-shattering news. It's a sin, of course, but not something unheard of.

I have certainly done things I regret whilst under the influence. When I sobered up, I regretted my actions, and resolved never to repeat them. Catholics have this wonderful Sacrament called Confession which allows them to express their sorrow for past sins to God, and He gives us absolution through the ministry of the priest. Then we can start afresh. We might repeat the sins, but as long as we intend not to do so, then that's all God asks. Even priests (and Cardinals) get to go to Confession.

This all leaves me with some very basic questions.

First of all, this happened about thirty years ago. Why have the accusations only been made now? If one of the men was in his 20s when it happened, why, at the age of 50 years, does he suddenly feel the need to complain? Why didn't he complain back in 2003 when O'Brien was made Cardinal? A quote in the Observer article said that the Cardinal's accusers "want the Conclave electing the new Pope to be 'clean.' " Oh really? In that case, why didn't they say something at the last Conclave? You know... the one where Pope Benedict XVI was elected.

Could it possibly have something to do with the fact that it's only since the last Conclave that Cardinal O'Brien has been speaking out forcefully on pro-life issues, and the defense of traditional marriage?

All this leaves a very nasty taste in the mouth. If you need an antidote, go and read Mark Lambert's excellent blog post.

And when you've finished that, pray for the Church. Then pray some more.

Oh yes... one final point, in case anyone is tempted to use the combox to accuse the Cardinal of hypocrisy for condemning homosexual activity while indulging in such behaviour himself. Please don't bother. One can be a sinner oneself and still recognise (and preach) about the Truth.
Posted by Mulier Fortis on 25.2.13 8 comments:

Yeah, yeah... I know. Everywhere else copes with much colder conditions than we get here in England. But we're supposed to have a temperate climate, so "cold" isn't something we cope with very well, I guess.

The Blackfen Faith Group went to London on Friday. We did manage to see my favourite painting, but photos were definitely not allowed. We stopped for a photo opportunity by the fountains in Trafalgar Square. It was cold enough to freeze some of the water on the fountain...

Well, I was impressed...

(There are a few more photos on my Flickr page.)
Posted by Mulier Fortis on 25.2.13 No comments:

Cardinal Mahony has clarified his previous tweet. He does not intend to tweet during the Conclave itself..

Crawling Out Of The Woodwork...

For the next week or so, things are going to be horrible for Catholics. I almost envy the Cardinals their secluded Conclave - no outside information, no papers, no radio, no internet...

The abdication of the Holy Father seems to have encouraged those opposed to Pope Benedict's reforms to speak out. They have all come crawling out of the woodwork, eager to spread their dissenting opinions and views, perhaps in the hopes of influencing the choice of successor to the Chair of Peter. Annie Elizabeth told me that there was a positive side to this...

Just look at this little offering from the Editor of the Bitter Pill... (and Annie Elizabeth's riposte!)

We can see this as a positive development. It will certainly make it easier for the new Pope to clean out the dross.
Posted by Mulier Fortis on 25.2.13 2 comments: