I'm not entirely sure where I stand on the HPV vaccine thing.  On the one hand, I am wary of the possibility that this will encourage promiscuity (I'm ok, I've had the jab, so I'm not going to get any STDs, so I can have "safe" sex), and it might give a false sense of security (Ok, I don't need to worry about cervical cancer as I've had the jab)  On the other hand, the vaccine will help to reduce the risk of cervical cancer.
I did wonder about whether this was being brought in rather too quickly.  It had the feeling (and this was gut reaction on my part, based on the little information on the vaccine which had made its way into the media) of a knee-jerk reaction on the part of the government.
Then the Catholic school in Manchester banned it, even though the Church said that the vaccination wasn't against Church teaching...
Then I read what Joe had to say on Catholic Commentary.  It would appear that the school is a victim of media spin.
Apparently, the school had been involved in trials of the vaccine.  Several students involved in the trials suffered side effects (nausea, joint pains, headache and high fever) so the school governors decided against having the vaccine given at school, but recommended that pupils dhould receive the jabs through their GPs.
Now that really puts a completely different spin on things!
And maybe my gut reaction was right after all!
Posted by Mulier Fortis on 27.9.08 9 comments:

This morning, as I was getting ready for Mass, I listened to the radio.  Not a good idea.  I'm going to have to ditch the radio as well as the TV...  They had a piece on a woman who had campaigned to make abortion legal in this country.  Her justification for allowing legal abortion was that otherwise, women would have illegal abortions...
Ummmmmm.  Right.  That seems like a good justification for a law...
The woman being interviewed maintained that nothing her doctor could have told her about abortion or the developing embryo could have changed her mind.  She also claimed that most women were the same, and that the pro-life lobby were hyping things up to persuade women not to have abortions...
Well, actually, as someone who used to believe that abortion was ok, I can say that thinking about when life actually begins and considering the development of the foetus certainly has had an effect on me, and on many others.  The "tiny feet" pro-life symbol is effective simply because of this consideration: at ten weeks' gestation, the "blob of tissue" referred to by the pro-choice lobby actually has ten toes, complete with toenails.
Language is another powerful tool.  I wrote an article about foetal tissue transplantation back when I was a research scientist (shortly after I returned to the Church, and once I realised where the research I was doing was actually likely to lead...), and one of the things which struck me was the manipulation of language: do anything to disguise the fact that we're dealing with unborn babies.  Pregnant women were referred to as "the gravida" because pregnant women have babies, while gravida have blobs of tissue, and donating tissue for transplantation is more acceptable than donating bits of babies.
John Smeaton has a piece on recycling babies which demonstrates this use of language very well: he's done it the other way around, and put "tiny person" in the place of "embryo".  It really hits hard!
Posted by Mulier Fortis on 27.9.08 1 comment: 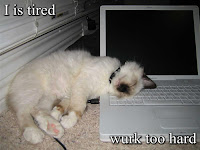 I apologise for my lack of posting over the past few days... things at school have been a little hectic of late, and I've just been too tired to think straight by the time I got home.
Just how tired was brought home to me today when I actually fell asleep at the keyboard this afternoon... so I gave up all attempts at work and blogging, (and all thoughts of housework) and went to have a nap.
I guess a very early night might be on the cards...
Posted by Mulier Fortis on 27.9.08 No comments:

Anna Arco told me yesterday that the saying was "Dogs are Catholic, cats are Protestant." Something to do with dogs being loyal and obedient, while cats are totally independent and do their own thing...
I would disagree with that... after all, the Holy Father is known to be rather keen on our feline friends; I would suggest that "Cats rule, dogs drool..."
Sylvester is reminding me that we are well overdue for a cat picture, and so, in order to show Anna that I bear her no ill-feeling for being a dog-person rather than a cat-person, I shall dedicate the first picture to her... 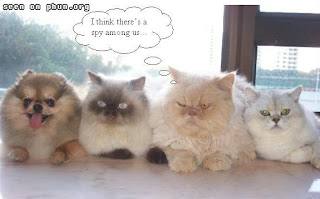 But I couldn't resist adding a few more... 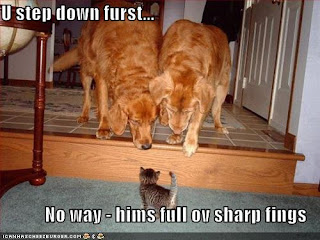 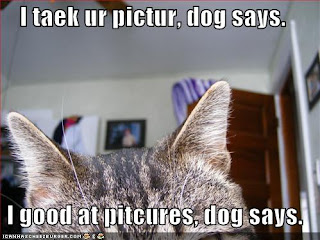 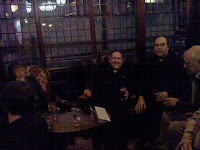 Fr. Tim and Fr. Z both advertised a London blognic for this evening.  I had been very keen to go, but work has been rather hectic of late, and I was so tired on Monday evening that I decided that I wouldn't go along.
This evening, I thought about it, and decided that it really would be a shame if, when lucky enough to have a blognic arranged practically on my doorstep, I didn't make the effort.  I knew vaguely where the pub was, and decided to use my sat-nav to help me hone in on the exact location.
My journey was a little slow - lots of traffic - but not as bad as the last time I drove into town.  And I found a parking space a street or so away... parking opposite the pub itself is discouraged by the presence of large men with guns... Petty France is round the back of the Horseguards' Barracks (at least, I think that's the one!) 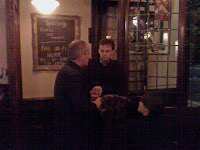 I arrived about 7pm.  To my delight, I saw Damian Thompson, and was able to thank him in person for the plug on his blog... he grinned and told me that my piece on Womynpriests had upset a few people.  Fr. Tim was there, and of course, Fr. Zuhlsdorf.  I also finally got to meet Anna Arco, a leading journalist for the Catholic Herald (her excellent interview with Bishop O'Donoghue on his documents Fit for Mission? Schools and Fit for Mission? Church can be read HERE.)  I was amused to discover that, like me, Anna doesn't like having her photo taken either, so you'll have to make do with this one of the side/back of her head!
I found that quite a few bloggers and blog-commenters had been and gone by the time I arrived, but I was pleased to meet up with avid blog-commenters, Sir Dan of the Blogosphere, and Londiniensis.  Another priest present, who said some very kind things about my blog, was Fr. Young.  I tried to persuade him that starting his own blog would be very easy... but I'm not sure that I managed to convince him!
I see that Fr. Z has already posted a few photos from the blognic: you can find them HERE and HERE...
Posted by Mulier Fortis on 23.9.08 2 comments:

This is keeping the Physics staff (and the rest of the Science department) rather amused - so no doubt the kids will be rapping along in lessons (yeah, right!)
The sound quality is a bit glitchy as You Tube had some problems when it was put up, but it's worth staying with it!!
Posted by Mulier Fortis on 23.9.08 1 comment: 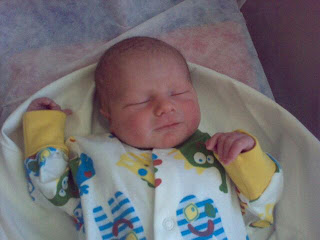 I was sent a picture message photo of my new nephew to admire.  Thank you all for your prayers - mother and baby are home now, and doing well!
Posted by Mulier Fortis on 22.9.08 2 comments: 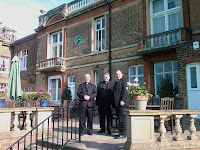 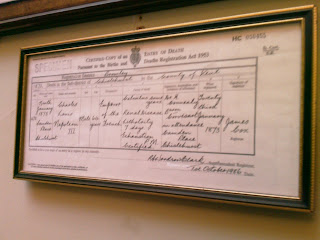 The death certificate of Napoleon III, no less!  One detail rather amuses Fr. Tim, and he pointed it out to us: under "Occupation" it is noted that the deceased was "Emperor of the French."
Lunch was very good too.  Fr. Z. was persuaded to have treacle tart for dessert, something he had never experienced before.  He was warned by the waitress that the tart was very hot, and, as he registered disbelief, (the plate was cold) we had to explain that the treacle itself would be extremely hot, and sticky, and that this combination could take the skin off the roof of his mouth if he wasn't careful!  He survived the experience, but I doubt he'll try to repeat it!!
Posted by Mulier Fortis on 21.9.08 4 comments: