This is just sooooo funny... but so true too! If you ever wondered what it was about rosaries that Catholics love so much, and why those same rosaries can cause Protestants to have palpitations and come out in a bad case of hives, then Stuff Catholics Like is the site for you.

Mantilla twitched to the Curt Jester (who writes some of the articles!)
Posted by Mulier Fortis on 2.5.08 3 comments:

I was able to get to Mass at St. Etheldreda's, Ely Place, this evening. I was looking at the beautiful stained glass, and the statues, and it struck me that these images, and the decoration of the vestments, were the "textbooks" in times past, when the majority of people couldn't read, or didn't have access to books.

How could we possibly have forgotten that all this beauty was practical as well as aesthetic? Why were churches stripped of all their statues and pictures? - and I'm not referring to the Reformation, but to the wreckovation which happens in parishes even today! 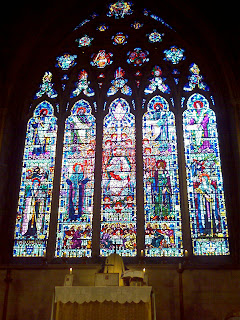 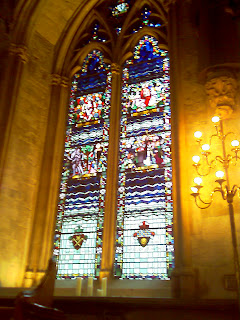 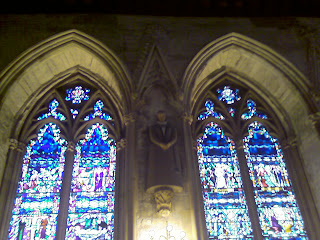 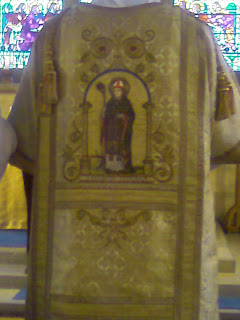 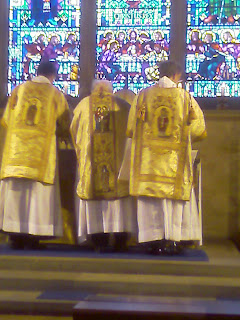 We celebrated the Mass of the Ascension at Blackfen, in the Extraordinary Form of course... It was wonderful, and the Franciscan Sisters of the Immaculate made a visitation to the parish to sing the propers for the Missa Cantata. Fr. Tim quipped that they are one of the Orders that has refused to observe the Vocations Crisis... 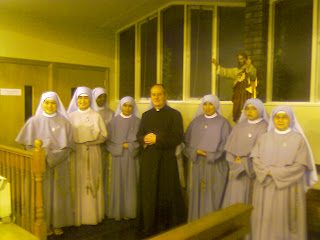 As Fr. Tim had pointed out about four times during his sermon last week, there was absolutely no obligation to go to Mass on Thursday, it was not the Holyday of Obligation, that would be Sunday... Plenty of other bloggers have indicated what they thought about Ascension Thursday Sunday, and Christ ascending to heaven 43 days after the Resurrection... 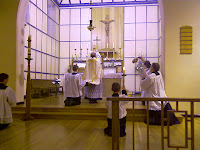 And the number of people who turned up for the Mass rather indicates what their thoughts on the matter were... There were at least 65 people present at this non-obligatory ex-Holyday. Methinks their Lordships have shot themselves in the collective foot: by transferring the obligation to Sunday, they have opened up the possibility for extra Masses to be scheduled on the old Holydays... but in order to celebrate the Feast, they have to be from the old calendar... so many more people than would otherwise have made the effort to attend the Extraordinary Form have done so... and will have rediscovered the beauty of their Catholic liturgical heritage...

Oooops. Somehow I don't think that was the intention...
Posted by Mulier Fortis on 1.5.08 2 comments:

A blonde lady motorist was about two hours from San Diego when she was flagged down by a man whose truck had broken down.

The man walked up to the car and asked, 'Are you going to San Diego?'

'Sure,' answered the blonde, 'do you need a lift?'

'Not for me. I'll be spending the next three hours fixing my truck. My problem is I've got two chimpanzees in the back which have to be taken to the San Diego Zoo. They're a bit stressed already so I don't want to keep them on the road all day. Could you possibly take them to the zoo for me? I'll give you $100 for your trouble.'

So the two chimpanzees were ushered into the back seat of the blonde's car and carefully strapped into their seat belts. Off they went.

Five hours later, the truck driver was driving through the heart of San Diego when suddenly he saw a horrific sight! There was the blonde walking down the street and holding hands with the two chimps, much to the amusement of a big crowd.

With a screech of brakes he pulled off the road and ran over to the blonde.

'What the heck are you doing here?' he demanded, 'I gave you $100 to take these chimpanzees to the zoo.'

Please don't bother telling me that standards in the exams are the same as they always have been. It just isn't true. What is true is that the exam burden on students has increased to ridiculous levels. And don't get me started on the subject of coursework. I'm having to mark quite a lot of the wretched stuff at the moment...

Anyway, I spotted this over at Paulinus' place...

5. Teaching Maths In 2008:
A logger cuts down a beautiful forest because he is selfish and inconsiderate and cares nothing for the habitat of animals or the preservation of our woodlands. He does this so he can make a profit of £20. What do you think of this way of making a living? Topic for class participation after answering the question: How did the birds and squirrels feel as the logger cut down their homes? (There are no wrong answers.) 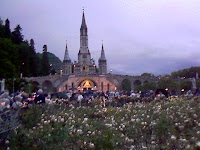 I love Lourdes. I may have mentioned this before!

Anyway, the annual Parish Pilgrimage to Lourdes is at the end of the month, and I am the lucky soul who gets to do all the organising.

There was a rumour that the Holy Father was going to be popping along too... I heard it from the hotel owners last year, and also from a nurse who assured me that the hospital room where John Paul II had stayed last had been booked for the 31st May.

It seemed too good a chance to miss, and so we extended our stay by a day and moved it to include the weekend. Sadly, it seems that the Holy Father has changed his mind (I refuse to believe that two totally independent sources could both plump for the exact same day by pure chance!)

Anyway, I've managed to arrange the times of Mass for the group - the main difficulty with this is persuading the Shrine authorities that we want Mass in a particular chapel, and will move the Mass to whatever time is necessary. Of course, the official tour operators are more interested in herding their pilgrims round to various attractions according to a military-style timetable, which is why they often end up taking groups over to some of the more austere* chapels... and it is also why we no longer use the tour operators!

Heheheheheh... It would appear that, even if the Nuncio isn't interested in what the Blogosphere has to say about the succession, Paddy Power is keeping a beady eye on things.

Blogging Supremo Fr. Timothy Finigan is still in there (according to Paddy Power) at 10-1.
Posted by Mulier Fortis on 29.4.08 2 comments:

The merry month of May approaches, and with it the commemoration of the martyrs who died at Tyburn. This is a great annual event, walking the route that the martyrs would have taken from Newgate Prison to the Tyburn Tree, stopping off at a few key churches and finishing with Benediction at Tyburn Convent.

We start at St. Sepulchre-without-Newgate (diagonally across from the Old Bailey) at 2:30pm on Sunday 4th May. We stop at St. Etheldreda's, Ely Place, then St. Cecilia's, Lincoln's Inn Fields, and then St. Patrick's, Soho Square - where we also have a blessing with the relics of St. Oliver Plunkett and (I think... though I may have remembered it incorrectly) St. Cuthbert Mayne.
Benediction at Tyburn is some time between 5:30pm - 6pm depending on how quickly people walk!
Posted by Mulier Fortis on 29.4.08 2 comments:

After blogging about the rumours concerning the terna for the Westminster succession, I have finally had a chance to calm down enough to read the Telegraph article more carefully...

Mandrake has heard this rumour about the shortlisted candidates from someone in Archbishop's House. Now, there are not many people who would have access to any such shortlist. It is not the sort of document to be left accidentally lying around under a pile of missalettes and newsletters. This suggests that the terna has been deliberately leaked...

Given that the Nuncio isn't based at Archbishop's House, we can safely conclude that he isn't the source of the leak...

I'm not entirely sure of the condition of fish in the state of Denmark, but something here reeks of political manoeuvring by members of the English and Welsh hierarchy. Are all the calls on the blogosphere for an appointment from outside the so-called "magic circle" making their Lordships a trifle nervous, perhaps?
Posted by Mulier Fortis on 27.4.08 6 comments:

Papa Preaches Up A Storm! 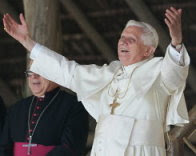 The Seminary in Yonkers, New York, has been inundated with applications since the Papal Visit, according to a report by CNA. The diocesan vocations director, Fr. Sweeney, commented: “We were hoping the Pope would convince many who were considering the priesthood to make the next step. It looks like he did.”

So what did the Holy Father say that had so much impact? Read it for yourself, HERE.