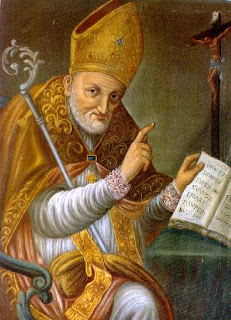 There has been a lot of blogging on translations (and the inaccuracy of ICEL) lately. This is something else I've noticed when reading The Sermons of St. Alphonsus Liguori.

It seems as though every other sentence is from Scripture. (NOT a criticism, I hasten to add!) What is really weird is that I sort of recognise the scriptural quotes from praying the Divine Office, especially the ones from the Psalms... but the meanings are subtly different. And it's somewhat disconcerting to find that the version used by St. Alphonsus fits in perfectly with what he's trying to say, whereas, if I inserted the modern "translation," the meaning wouldn't fit as well.

For example, St. Alphonsus renders Proverbs 10:23 as "A fool worketh mischief as it were for sport" whereas the New Jerusalem Bible has "A fool takes pleasure in doing wrong" and the Good News Bible has "It is foolish to enjoy doing wrong." There isn't much in it, but there is a nuance there. And in Sermon XX (The Evil Effects of Bad Habits) there is an even clearer example:

"At thy rebuke, O God of Jacob, they have slumbered." Even earthquakes, thunders and sudden deaths do not terrify an habitual sinner. Instead of waking him to a sense of his miserable state, they rather bring on that deadly sleep in which he slumbers and is lost.

The New Jerusalem Bible has the quote from Psalm 76 as "At your reproof, God of Jacob, chariot and horse stand stunned." The Good News Bible has "When you threatened them, O God of Jacob, the horses and their riders fell dead." Slumbered, stunned and dead are hardly synonyms...

Now, I'm no expert, but the clear sense in which St. Alphonsus is quoting the Scriptures indicates that there is something very wrong with the translations we have now... even though they may be technically more accurate translations from the original Hebrew and Greek texts, they are obviously not giving the sense of the Bible passages as used in the Church for centuries. The Scriptures are not supposed to be read outside the living Tradition of the Church - we seem to have forgotten this!
Posted by Mulier Fortis on 20.1.07

I know what you mean about the Scriptures being structurally placed within the activities of the Church, Mac.

There are a few things in the current Divine Office that make me go bleugh! Most often they are to do with the commonly recited prayers that I know a particular way.

Lord, now lettest thou thy servant depart in peace according to thy word. For mine eyes have seen they salvation; which thou hast prepared before the face of all the people; to be a light to lighten the Gentiles and to be the glory of thy people Israel.

Lord, now you let your servant go in peace; your word has been fulfilled. My own eyes have seen the salvation which you have prepared in the sight of every people: a light to reveal you to the nations and the glory of your people Israel.

-- virtually no difference there, just thou and thys gone. But see this one next!

At last, all-powerful Master, you give leave to your servant to go in peace, according to your promise. For my eyes have seen your salvation which you have prepared for all nations, the light to enlighten the Gentiles and give glory to Israel, you people.

...the ICET translation is thankfully provided at the back of the book; even the meaning is slightly distorted by the one quoted above--it is changed from a statement with a beseeching question into merely a statement.

May I suggest that rather than using the NJB, you use the Revised Second Edition. This particular edition by Ignatius Pressis very good and may be ordered from Family Publications in Oxford.