I Want One of Those! 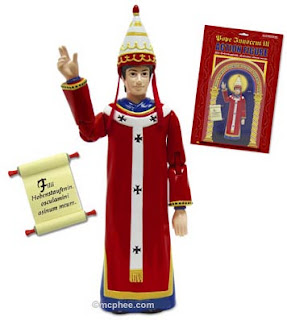 When I spotted this over at Cally's Kitchen, I was sure it had to be a wind-up. He is, after all, the man who gave us a talking chair and a philosophical cow. But I just couldn't resist exploring a little further...

Sure enough, you can actually buy Innocent III action figures... I quite liked the sales pitch:

Introduce this Pope Innocent III Action Figure to your other figures and watch the spiritual sparks fly! Armed with his formidable power of excommunication and an intimidating scroll inscribed with Latin text, this 6" tall, hard plastic model of the 176th Pope will soon have all your other action figures lining up for confession. Read the back of the illustrated blistercard and you'll find that Pope Innocent III was a good guy in all respects. He was a patron of the arts, cared about orphans, built a hospital and reunified the Papal States! Comes with removable fancy Pope hat.

They also make Jesus as a deluxe model - he comes complete with loaves and fishes and a water jar for changing water into wine (though this feature is apparently not guaranteed!)
Posted by Mulier Fortis on 18.1.07