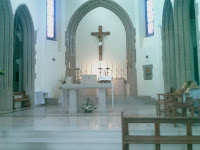 Today being the Feast of St. Joseph, it seemed particularly appropriate to be going to Mass at St. Joseph's Church, New Malden.
The last time I was here, for Martyrs' Day, I arrived only just in time for Mass, and didn't have time to ask permission to take photos. I don't like to whip out the camera unless I know the celebrant won't mind, so no photos were taken.
This time I arrived early. I settled down at the front, and, as no one was around, took a couple of photos of the High Altar. Fr. Richard Whinder then walked in, and gave permission for me to take photos during the Mass...
...unfortunately, Fr. Tim Finigan was hard on his heels, and "suggested" that I use his camera. It has 7 megapixels or something crazy like that, compared to my measly 3 megapixels...
After yesterday's "blonde moment" with Dr. Laurence Hemming's camera I was a little loathe to abandon my own one. After all, better the devil you know... however, the light levels were beginning to fall, and my phone camera does have problems in low light... and I really do like to get those "key" moments.
Fr. Tim demonstrated how to look at the photos on the camera itself, and I figured that, if the first few didn't come out, I could switch back to my own camera for the really important shots.
I needn't have worried: the camera worked perfectly. Not so much as a beep. I even discovered, half way through Mass, that there was actually a zoom lens, but preferred to get the "whole" picture for most of the shots. 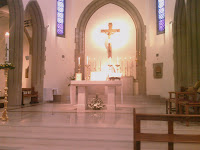 It was a very nice camera. A very, very nice camera. Unfortunately, after Mass, Fr. Tim seemed to want it back...
So I don't have any photos of the Mass. Not one. Not until Fr. Tim gets round to downloading them from his camera, and I think he's got a busy few days ahead, so I'm not going to hold my breath. But I'll put them up soon...
Posted by Mulier Fortis on 1.5.09

HAHA! You are hilarious, Mac :D

I hope you get the camera off Fr. Tim soon! It was good to meet you today in Blackfen. I'm sure I shall be back in the future.

Hey, Mac, you know you could have probably used TWO cameras...yours and his.

I have a really small vivitar, 6 megawhatevers. It takes really nice pics and if I'm careful (i.e. make sure flash is off, etc) I can get some pretty good pics indoors without being blatently obvious to the most casual of observers.

Shaun - good to meet you too.

Karen - while I can take photos with two cameras, I can't get the exact same shots... and there is only one consecration, and one has to time it just right to get those really eye-catching moments...