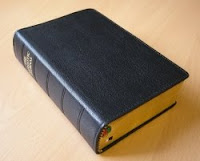 Back in February, I explained that I was going to start saying the Divine Office in the Extraordinary Form, and that I had opted for the Monastic Diurnal, because it had the Latin and English side-by-side, and I wasn't too worried about not saying Matins (not at the moment, at any rate) which isn't included in the Diurnal.
The Diurnal doesn't have a separate chapter with the rubrics. It was designed for monastics who were travelling, and presumably they'd know the ins and outs of the Office. Instead, there are little instructions dotted about here and there... and they seem to be designed to catch out the unwary soul. For example, the rubric which instructs you to substitute two festal psalms for the ferial ones is to be found on the page after the ferial psalms, where it says "the preceding two psalms are replaced by the following two..." which isn't much help if you've just dutifully ploughed your way through the first lot only to find that you should have prayed something quite different!
So I was delighted when Terra (of Australia Incognita) started up a new blog, called Saints Will Arise, designed to guide people through the Benedictine Monastic Office, with particular emphasis on (and page numbering for) the Monastic Diurnal produced by St. Michael's Abbey Press, Farnborough.
The Ordo for each week is published in advance, as well as hints and tips, explanations, information about the saints and lots more. I can really recommend this blog for anyone wishing to pray the Monastic Office, and anyone who wants to know more about the structure of the Traditional Divine Office in general.
Posted by Mulier Fortis on 29.4.09

I too was initially caught out with these quirks so thank you very much indeed for the excellent link to help this poor fool in his daily observances.

Am I correct in thinking it was Dom Alcuin Reid OSB (as he was then) who assisted greatly in getting this wonderful diurnal into the public domain?

It seems so - he wrote the introduction anyway!

Glad you find the link helpful.

For example, the rubric which instructs you to substitute two festal psalms for the ferial ones...The same awkward thing happens in the Roman Breviary, e.g. at Prime on Sundays.

Thanks for your couple of plugs, Mac I apreciate it!

The Benedictine Office is a very beautiful treasure, but I think we've all struggled through this stage of working it out, so its nice to be able to share what I've learnt so far and hopefully make it a bit easier for others!

And yes, it was Dr Reid who was the editor of the Diurnal. He (and the Abbot of Farnborough, Dom Cuthbert) also provided a lot of help to those starting off via a yahoo group run by the indefatigible Michael LoPiccolo which also helped me a lot in the early days.

The Diurnal is practically crying out for someone to do an electronic version along the lines of the older Roman Rite now at breviary net, so we can mostly avoid having to think about rubrics! But in the meantime, glad to be able to help a few people up the learning curve.

Thanks for the tip. As it happens I have an older two vol. copy of the Office. I might give that a whirl now and pull it out and try and make some use out of it!

I forgot to mention that I have ordered a leather zipped cover for the Diurnal throught the CTS bookshop beside Westminster Cathedral. If you wish you could phone them and add to the order (they offer burgundy or black).