Two weeks ago I was bemoaning the loss of what would have been a second-class relic (though I wasn't aware of this at the time, the late Pope still being very much alive.)

One reader, who shall remain anonymous (unless he indicates that anonymity is not required) contacted me to offer me a replacement. I felt a little guilty - after all, I hadn't posted my cri de coeur in an attempt to get a replacement, and I was sure that there were plenty of other, far more deserving, possible recipients of such a relic. However, the thought of getting my paws on a genuine second-class relic did rather appeal.

The rosary arrived, in its original case... identical to the one I had lost. I promptly prayed a rosary for the intentions of the donor... Many, many thanks... 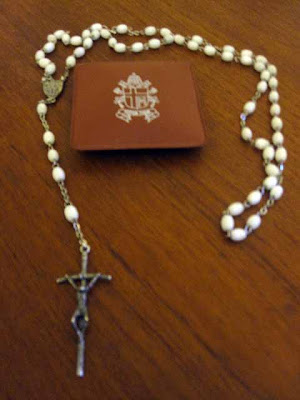 I was presented with an identical set of rosary beads as a wedding gift from the Holy Father, whom my husband and I met as sposi novelli after a general audience. We were then instructed to go into an office in the Apostolic Palace, where a lower-level official (perhaps a monsignor) presented me with the rosaries and my husband with a key ring and said that these had been blessed by the Holy Father.
So, does this mean, if anyone has anything that was blessed by Blessed John Paul, he has a second class relic? This may also mean that the medals I had affixed to my hat at World Youth Day '93 in Denver may also be second class relics, because at the end of the Mass I remember the Pope saying "I hereby bless all your religious articles," or something like that.

Wait, I have one of those too (it's here SOMEWHERE)...does that mean that I also have a second-class relic?

I have one of those! Although the bottom bit of the cross snapped off in my pocket, so be careful! Mine's B16-blessed, so not a relic :(