The Guild Of Blessed Titus Brandsma...?

...Of course, the name hasn't actually been agreed... The idea behind not calling it a Guild of Catholic Bloggers is, I understand, because it can't call itself "Catholic" without the agreement of the Bishops. I can't quite see what grounds they'd have for forbidding the use of "Catholic" in the title - after all, The Suppository claims to be a Catholic paper, with far less justification than the blogs...

I had hoped to be able to attend the meeting, but First Holy Communions at the parish took precedence... and then I wanted to try to sort out my iPhone, which had gone on the blink again on Friday night. It soon became clear that I wasn't going to be able to get the thing sorted straight away - and I have come to loathe Apple and its iPhone with an intensity I'd never have believed possible. I decided to cut my losses, transferred my SIM card to my old XDa Orbit II and made tracks for the Big Smoke...

I soon found myself remembering why I hate to use public transport. I forgot that I had to tap my Oyster card onto some yellow contraption - the ticket office was closed, the cash-operated automated machine was out of order (temporarily, as it transpired) and no yellow contraption was visible to jog my memory. My immediate attempt to buy a ticket on arrival at London Bridge was met with hostility and suspicion... and I incurred a penalty fare. My bank card was demanded. I pointed out that I didn't have one with me, otherwise I'd have managed to purchase a ticket from the one functioning ticket machine (card-only) back at the station. A rather rude inspector told me that Oyster cards could be topped up at lots of places. In vain did I point out that (1) I didn't know that I needed to top up my card until I got to the station, (2) there wasn't anyone around to sell me a ticket at the station and (3) I didn't realise that I was supposed to tap the Oyster card onto a yellow thing even if there wasn't any money on it. I was accused of lying. Realising that it was futile to explain that, had I wanted to dodge the fare I wouldn't have sought out the ticket inspector and could have given a much closer station as my starting point, I resignedly gave my name and address, and someone rang up a database somewhere to check that I existed.

Eventually I arrived at Victoria, and proceeded to phone Red Maria to try and locate the hostelry in which she and the others were staked out... After a mad dash inside to powder my nose, I joined the group.

I wasn't sure whether anyone else would still be around (the original meeting had been due to finish at 4pm), so I was delighted to find the group chatting merrily away. After brief introductions and a restorative slug of wine to soothe my frayed nerves, I realised that this was a marvellous photo opportunity. Everyone was happy to be included - Patrick suggested that, being a commenter rather than a blogger, he should be the one to take the photo... I firmly resisted this divisive and discriminatory proposal! 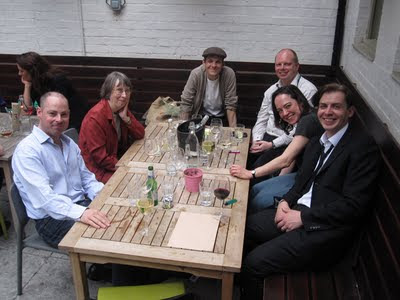 It was a wonderful evening. Starting from bottom left, and proceeding clockwise - Patrick was there as a commenter, as was Liz, though she also represented Jane of the Thoughtful Oasis (who had been unable to cross the Channel for the meeting!) I'd met Bones (aka Laurence England) in Brighton for Fr. Ray Blake's Jubilee. I recognised Dylan (the Reluctant Sinner) from a video clip of the Vatican Blognic where he'd been sitting next to Jane. Red Maria (of the Dolphinarium) is a very good friend of several years' standing - I think we first met at a blognic at the Buckingham Arms. Finally, it was a delight to meet Paul (On the Side of the Angels) at long last, having read his tweets and blog posts and also his vigorous comments in defence of the Faith on Damian Thompson's Telegraph blog!

My only regret is that, not having been at the meeting proper, I never got to meet Simon (Catholic Reflections), Stuart (eChurch Blog), Stephen (St. Paul's Bookshop), Gregg (A Brief Encounter), Richard (Linen on the Hedgerow) and Fr. Samuel (Medley Minute) !

Having read Dylan's account of the actual meeting, as well as chatting about it in the pub, I have great hopes for the Bloggers' Guild (whatever we finally get to call it.) It is certainly not an attempt to be divisive (unless you consider that faithfulness to the teachings of the Church and love for and loyalty to the Holy Father is already divisive!) Nor is there any desire to control what is said on individual blogs, or to be seen as representing Catholic Bloggers. It is simply a way of offering support (especially spiritual support) and encouragement for each other...

I'm gutted to have missed you guys at the pub, maybe next time.

It was really, really good to meet you! I'm so glad you managed to come to the pub, despite the problems caused by TFL!

Hope to see you soon.

What an opportunity lost! Sorry to miss out on the pubnic and on meeting yourself and Red Maria!