Busy Day In The Parish... 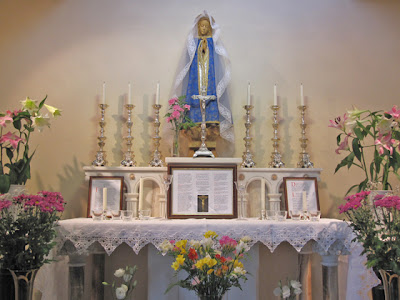 Today we had a wonderful Missa Cantata in honour of Our Lady's Assumption into heaven. The choir came back from their "holiday" to sing the propers, and the congregation joined in joyfully with the Missa de Angelis and Credo III. One of the parishioners had managed to find a crucifix which matched the candlesticks for Our Lady's altar, and he and two friends chipped in to acquire it, and then kindly donated it... it does look much better than the brass one we had before. 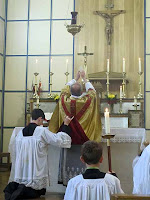 It was a little disconcerting to find that a team from BBC Radio 4 were recording the Mass as background for a programme they intend to do for the Holy Father's visit. The size of the microphone stand made me feel much better about my discreet little camera monopod... I had brought the latter along, but decided that it was just too unwieldy with the crutches in the way. I did, however, manage to take a few good photos, even without the monopod. 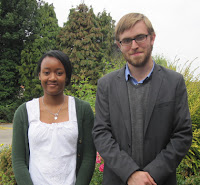 After Mass, I had a chance to talk to Daniella Adams and James Blythe, who are responsible for co-ordinating blogging, facebooking and tweeting (on behalf of the Southwark Archdiocese) in the run-up to, and the duration of, the Holy Father's Visit.

We went in to the Parish Club for a few cups of tea (and something a little stronger once the bar had opened) only to find that the Radio 4 team were actually carrying out interviews. They started off quite near me, interviewing the youngest of the Treloars who cycled to Rome, but they soon gave up because of noise levels, and retreated to a quieter part of the club. I gather that they had intended to interview His Hermeneuticalness, but decided to try to do so on another occasion... either they were in a hurry, or the noise levels were playing havoc with the sound equipment! 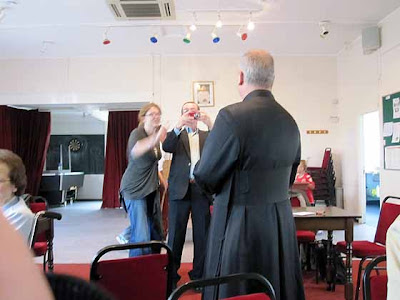 I have put up the photos from the Mass on my Flickr page, so do go and have a look. Remember, all photos can be used for non-profit-making purposes, providing that you credit me for them (preferably with a link to my blog.)
Posted by Mulier Fortis on 15.8.10

I see by the lack of the Last Gospel card that you had a proper Last Gospel...does this mean that you had the Old Rite? Because by the looks of the Missal the Propers you used were the inferior modern ones. I can't say that I approve much of this cafeteria approach to Liturgy...if you used the modern propers why didn't you follow the '62 rubrics to the letter, where there is no proper Last Gospel? It's not the presence of lace cottas that put me off today but the fact that you used an inferior Mass formulary.

But I guess that the Rossini propers don't have a Gaudeamus option...

Thank you for posting the photo of the Lady Altar, and your appreciation of the new crucifix. I was able to email send a link to to the lady from who it was purchased, and recieved a reply containing the following:-

"Thank you so much for your email. It was really great to see that the crucifix had found a new home in your church. I thought that it looked beautiful along with the superb candlesticks. I was quite moved by the sight of them and the fact that the crucifix could not have found a more appropriate place. Thank you for taking the trouble to let me know."