Learning The Chants For The Papal Mass... 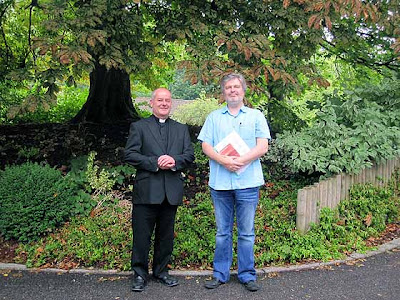 It's a little hard to follow without the musical notation, but practice, as they say, makes perfect. I think it's a brilliant idea to release it all early so people have a chance to become familiar with it.

The Catholic Herald has a brief interview with James MacMillan, discussing some of his thoughts on the Mass... though I think I have the better photograph!!
Posted by Mulier Fortis on 20.8.10

Hi, I'm the organiser of the page with the MacMillan audio files on the Forth in Praise website. Thanks for linking to us. Forth in Praise actually belongs to the Archdiocese of Edinburgh, although the Glasgow organisers have put a link to us on their site.

It was a condition of permission that we didn't include the score or any sung words, though we would have liked to. Still, we hope if people just keep listening to it they'll find it easier once they actually get hold of the score.

We appreciate it when people link to our practice page. It's a lovely Mass setting, and it's good for people to know about it, even if it isn't published yet.

Music publishing rights are completely beyond my comprehension. I'm just so relieved that you've managed to get the melody out so that people have got time to become familiar with it. That's half the battle with getting new music (or old music, for that matter!) accepted in parishes.

So thanks once again.

Thanks for that, Mac. We're quite amazed at the reaction to our online audio files. Glasgow still haven't got the CD and score out to the congregation yet, so our webpage is all there is (maybe a bit of the old Glasgow/Edinburgh rivalry creeping in here!).

Love your cat pictures. My cat died in March and I miss her so much.