Home Are The Wanderers... 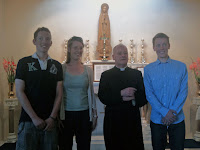 They made it back to Blighty, safe and sound, and with bicycles.

This morning, after Mass, the trio of cyclists posed for a photo-shoot (at the insistence of His Hermeneuticalness) - I was pretty miffed, because I didn't have my camera handy.

I did have my iPhone, but, as I have noted before, the camera really sucks. No flash. Very poor colour balance. No zoom...

The photo I took was awful. I altered the colour balance and lighting as much as possible, which is the only reason that anyone's face can be seen. I think I am going to have to start carrying my snazzy Canon IXUS 100 around with me all the time, because I've been caught short on several occasions...

However, the trio also agreed to pose outside (mostly on the insistence of their mother, who wanted them to stand by the statue of Our Lady, where they had posed at the beginning of their epic voyage) and the iPhone camera is much better in natural light (though still leaving a lot to be desired.) 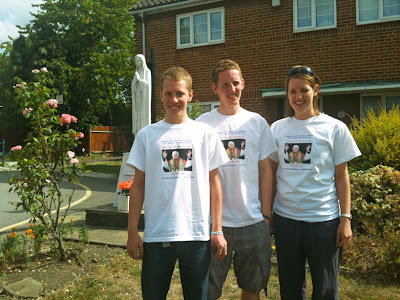 I was already running late for my hospital appointment, so I didn't have time to get a properly posed shot, nor to chat to the three pilgrims. Bless them - they seemed more concerned about my recent misadventure than with their own achievements.

Do go over to their donations page if you haven't done so already...
Posted by Mulier Fortis on 30.7.10