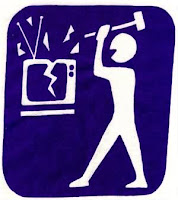 When I originally got broadband, there was a special offer on the bundle package of internet, phone and cable TV. I soon realised that the TV part of the deal was a complete waste, as I rarely watched it. I then decided that I resented paying the license fee for the anti-Catholic rubbish produced by the BBC. I promptly sent the set-top box and activation card back to the cable company, and gave the TV away.


In common with many teachers, I put off lots of little jobs until the Summer holidays, when I have the time to deal with them. One such item was sorting out the phone and internet package, and I decided that today would be a good time to attend to it.
After negotiating those irritating automated menus (You now have two options. Press 1 if you are ready to gnaw open your radial artery with your own teeth; press 2 if you have given up the will to live...) I got through to a real human being.
I explained that I wanted to arrange the best broadband-only deal, or to arrange a better broadband and phone package deal. I didn't want TV included in the package.
Unfortunately, the human being was working from a pre-arranged script.
"That's ok, the TV package is included free with the phone and the internet. There's no extra charge."
"No, really... I don't want the TV package."
"But it's free. It doesn't cost anything."
"I don't want the TV package. I don't actually have a TV."
"Ummmm...??!  No TV...?? Can I put you on hold for a minute...?"
*Sigh*  We got there... eventually...
Posted by Mulier Fortis on 28.7.10

TV or not TV - that is the question

If you sense the person has English as a 15th language, as to speak to a supervisor immediately.
Tell them you need to yell at someone above their pay grade. Believe me, the operator will turn over the call quickly.

My wife and I pay €7 a month NOT to have TV with our broadband & phone! Frankly, it's cheap at the price!

My youngest brought home an "advanced problem of the week" in Maths that started with "how many hours of tv do you watch in one week" and then went on to calculate minutes per year and per day etc. She was able to write zero as we do not have TV... Fastest advance problem we have ever solved.

GOTO;
with BBC you can actually do something : with the commercial stations in the UK you really can't, because the advertisers rarely have control over the content of the programmes their adverts are broadcast next to.

Mac:
to relieve the stress, my I recommend the splendid song by Kit & The Widow . . . which sounds much like your own wicked remarks, just at greater length !