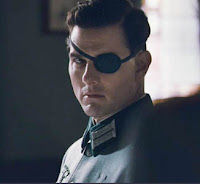 I'm not a fan of Tom Cruise, but the subject matter sounded interesting, I was in the mood to watch a film, and there wasn't much else by way of an alternative.
I really enjoyed it. I understand that it was extremely inaccurate, but I only had the sketchiest of ideas about the assassination attempt on Adolf Hitler orchestrated by Colonel Klaus von Stauffenberg.
Even though the ending was obvious, I found it an absorbing and entertaining tale. I can't wait for it to come out on DVD, as I think it's one I'd want to watch again.
Posted by Mulier Fortis on 2.2.09

I too want to see the film. My German friends all tell me the film is completely wrong, but that at the same time it is a very good film...

Thanks for the heads up. This is the sort of thing I like. I think there's also another WWII flick out --- starts with a "D" but my brain is fried right now. I've been in a "movie mood" too, and haven't been in a while.

No, it's not inaccurate. It's pretty accurate, in fact. Surprisingly.

Really? All the reviews I saw seemed to pan it as being unrealistic and inaccurate...