Male & Female He Created Them...

I was discussing the interesting differences observed between our Confirmation groups with Fr. Tim. We have the girls' groups on one night, and the boys' groups on another. Most boys still consider girls to be an alien species. In contrast, once again, most of the girls in my group had worked out the details of their weddings already. Some were quite upset that they wouldn't be able to get married on a beach, but cheered up again when I pointed out that the reception could be anywhere they liked, as the church didn't have to be British, just Catholic.
Over at +In Hoc Signo Vinces+, Paulinus has a post where he recognises the differences between men and women. The following graphic demonstrates the thought processes which occur in response to the question, "Do you want to go for a drink?" 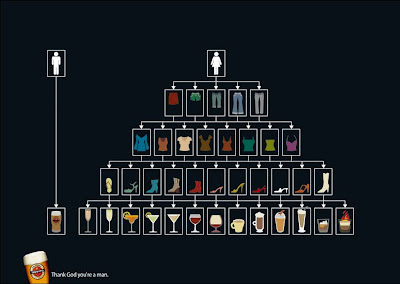 You forgot the layer where the woman thinks long and hard about her transport arrangements - there and back.

Oh, I love it. How true - and not just for teenagers, either!

The US comic Jeff Foxworthy explained this a long time ago: "You ladies always wonder 'what's he thinking?'."

"Gals, let me simplify this for you from about age 16 or so what he's thinking is I'd like a beer and to see something naked. That's pretty much it, it's no more complicated than that."