Should We Bother To Listen To The Public? 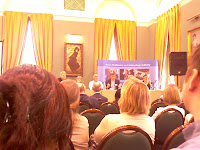 I kid you not... that was one of the questions asked at the end of the HFEA consultation meeting this evening. Ok, I simplified it a bit for the purposes of making a catchy post heading, but not much.

The majority of the audience seemed to be very much opposed to the idea of allowing the creation of human-animal hybrids and chimeras. Josephine Quintavalle spoke well, and she was actually backed up by John Cornwell, something I hadn't expected from a writer for The Tablet. The token clergyman, Anglican, did his best to sit on the fence. If he doesn't get down soon he'll get splinters where the sun don't shine. The two Science types kept banging on about how the human-animal hybrids were absolutely essential for working out the basic processes involved in cell development and differentiation, that this would be essential for working out therapies, and that the hybrid embryos would never be allowed to go to term, so the public was worrying unnecessarily.

My inward response* to this was that cell processes, at a basic level, are pretty much the same whichever mammal you use, so why not use mammals and leave human embryos out of it (if all you want to do is study the processes), that therapies involving adult and placental stem cells would be far less controversial ethically, and so more research should be done on them, and finally, that it's all very well to say that the hybrids would never be allowed to go to term, but we used to believe that cloned animals would never be allowed to go to term... and yet, somehow, we ended up with Dolly the sheep.

*I did try to make these responses out loud, but wasn't picked to get given a microphone.

The ethical considerations were not really dealt with. I came in late, to find that several people were contesting that embryos were not human beings, and therefore were not worthy of being treated with dignity. Comments were made to the effect that those who were ill with progressive diseases like Parkinson's, or people with relatives suffering from such diseases would have a very different idea about treatments which needed to be developed using embryo research. The chap from The Tablet actually warned about ends-justifying-means, and said that this led to the slippery slope. A particularly vociferous scientist challenged him to state where the slippery slope actually led... and I was pleased to hear him respond "the death camps." It is so true: the doctors in Nazi Germany justified their research on "sub-humans" because they hoped to get cures for diseases and such like.

And before you have a pop at me in the combox for equating such scientific endeavours with the Nazi death camps, and telling me that I'd feel differently if someone close to me had a debilitating and progressive disease, I would just like to point out that my mother is German, my grandfather has Alzheimer's Disease, and my grandmother had Parkinson's Disease. I have also worked in a laboratory with fellow scientists who believed that embryos were just sources of cellular tissue, and I know how easy it is for scientists to push the envelope that little bit further just to see "what would happen if..."

Although the ethical issues were not dealt with as fully as they might have been, I got the distinct impression that the majority of people present were unhappy with the idea of hybrids and chimeras. However, I was also confirmed in my opinion that the HFEA considered the meeting to be little more than a PR exercise: the question about whether the public should be consulted on matters of scientific research implied that the public were the great unwashed, and could not possibly understand matters of such scientific complexity, so the decisions should be left to the scientists. I shall watch carefully to see the final outcome of the consultation. I fully expect the opinion of the HFEA to be firmly in favour of allowing the creation of human-animal hybrids.

If you want to try and prove me wrong, the online consultation is still running, so please take some time to fill in the form HERE.
Posted by Mulier Fortis on 26.6.07

Although I couldn't go due to parish commitments, another expert in the field rather took the same view that you do: they have these consultations but then carry on with their agenda regardless. Bravo to Cornwell. We must be able to use words such as 'holocaust' to describe what is being done to human life in the name of so-called 'progress.'

I was there too (for the last 2/3rd's)- and I think it is clear what the public thinks – for the time being - but, public opinion is fickle and can change. There is one especially offensive piece in the HFEA consultation document "Hybrids and Chimeras" at pp14-15 under "Arguments against the creation of human/animal embryos”, the HFEA states: "Moral repugnance: people often feel an instinctive moral repugnance towards the prospect of creating hybrid or chimera embryos. However, precisely because this sentiment is based upon an instinctive reaction to something it is very difficult to characterise or, more importantly, to engage with in discussion…”. Is this the dictatorship of relativism speaking? Is this a back-handed swipe at natural law? Err, people also find paedophilia morally repugnant instinctively! Why??? We are really far gone down that slippery slope in this country. I have an idea: let’s get the animal rights activists engaged in this debate – creation of chimeras etc., is also abuse of animals, surely?

Hi, CL... sorry I missed you (maybe you'd have recognised me if I'd been wearing a mantilla!!)

As it so happened, the point about animal experimentation was commented upon by some animal-rights types!

Sorry Mac, I have to ask - is being German really a debilitating and progressive disease?

Ummmm... only when people get upset about mentioning the Nazi death camps and daring to suggest that many scientists wouldn't know a moral principle if it paraded naked in front of them!!

Ok, the German bit referred to the first part of the sentence, and I was so irritated by the meeting that my attention to grammar was pretty much shot to smithereens.
;-)

Sorry I missed you too - was on a watching brief - came late - agree that Josephine Q did well as did John Cornwell. I loved the point made by one chap who said "ethics issues aside, the whole thing just smacks of bad science!" The anglican priest (vicar?) was so wishy-washy it was pathetic, though he came across as so "nice", bascially saying, leave it up to your own conscience - heresy!! The very thing that Papa B has warned against - the subjectivisation of conscience.

I agree with Catholic Lawyer - the idea that moral repugnance cannot be engaged with properly and therefore is unworthy of true consideration is so facile. It seems to me, that as most people will react with moral repugnance and as the sort of scientific, relativist twaddle the HFEA wants to listen to is not the way most "ordinary people" think or write we can all conveniently be written off and ignored and the wise ones who can witter on with big words about why it is all so necessary will get their way.

I share your point of view that this 'consultation' is no such thing. Am I cynical? Not as much as this government is. For the last ten years they have 'consulted' on this policy and that law. In the end they do exactly what they have already decided to do. Look at the shambles that is the new Mental Health Act where the government has managed to alienate better than 90% of the very professionals who actually do know better - the Royal College of Pyschiatry!

As to the very dubious matter of introducing the "poor suffering victims of Parkinson's Disease (substitute suffering disease of the month) who will benefit from these techniques. Well, that is a perfect example of introducing 'emotionalism'into what ought to be a logical and reasoned moral philosophical debate. Kettles and pots here, me thinks.

Not that I can add anything much of substance, but I do have a relevant story that I think reinforces the "pushing the envelope" thing. Back when Dolly the Sheep came about, I was dating an engineering student who was very VERY interested in the other sciences. He and I got into a discussion about Dolly and cloning, and I said "But should we really go down this road? Where's it going to lead?"

His response: "I'll let the philosophers worry about whether we SHOULD do it. I just want to know if we CAN."

Citation: "The ethical considerations were not really dealt with. I came in late, to find that several people were contesting that embryos were not human beings, and therefore were not worthy of being treated with dignity".
This is very evil statement. I am scientist and I work with animals like rodents. To conduct my work I have to get a license issued by Home Office, and this can be obtained after passing quite difficult exam after completing the course organised by institutions like for example Royal Veterinary College. Someone can take several modules depending on the work to be done. Rodent embryos are treated very seriously, we learn that we cannot cull pregnant dams in the way that poor embryos can suffer, so they feel something these rodents! However, nobody cares about human embryos, for as stated above, "they are not human beings"? - This is wrong, they are human beings from the moment when two parental cells join to form a zygote, this is determined by the zygote genome, this is the beginning of the human being. I suppose that some theological questions can be raised here, when the soul is formed? In my understanding it is formed from the moment of zygote formation. Maybe this question was on the mind of those saying that human embryo is not a human being?