Oooh, another meme. Who thinks these things up? They need professional help...

Anyway, I've been tagged by the upside-down pastor, Fr Dwight Longenecker, to reveal "my four favorite saints, one favorite blessed, and one person I think should have been a saint"

I'm assuming that Our Lady doesn't qualify (if you know what I mean) because I could use up my four favourites by just invoking my favourite titles for her: Our Lady of Lourdes, Our Lady of Fatima, Our Lady of Rocamadour, Our Lady of Grace, Our Lady of Walsingham... oops, more than four, and I haven't quite finished...

Limiting myself to just four saints is going to be extremely tricky. I collect saints for various occasions...

*sigh* well, if I can only have four, then, in no particular order, it has to be:

St. Alphonsus Liguori (the stuff he wrote, especially on Our Lady and the Rosary, is just brilliant. And mind-blowing.)

St. Louis-Marie Grignion de Montfort (for his Total Consecration to Jesus through Mary outlined in "True Devotion to Mary")

St. Francis de Sales (for pointing out, in his book "An Introduction to the Devout Life" that we are all called to holiness, whatever our state in life)

St. John Fisher (awesome English Bishop, who preferred to be martyred than accommodate the political powers of his time... a few more Bishops like him, and the country would probably not be going down the pan quite as spectacularly as it is right now!!)

And four female saints... (you didn't really expect me to follow such mean-spirited rules, did you?)

St. Bernadette (I adore Lourdes, but ever since I saw St. Bernadette's incorrupt body at the convent in Nevers, I have been completely smitten with her.)

St. Anne Line (I've explained elsewhere why I like this feisty woman. A great martyr for the Faith!)

St. Cecilia (another martyr: but as she is the patron saint of church music, I feel we possibly need her help in getting rid of the heretical hymnals... I feel an auto da fe coming on...)

Finally, last but most definitely not least, St. Catherine Labouré. I know very little about her, but I have a real attachment to the Miraculous Medal, and I want to go and see her incorrupt body at the Rue de Bac.

My favourite blessed is a little tricky... I think I'm going to cheat again, and vote for a Venerable...

...in which case I'm having Venerable Louis of Granada - apparently a favourite writer of St Teresa of Avila... and his book, "The Sinner's Guide" is fabulous. 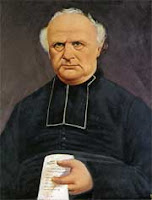 Ok, now for the "should have been a saint" category... I think Dean Peyramale (parish priest of Lourdes at the time of the Apparitions) gets this slot. When I first went to Lourdes, I couldn't understand why he was commemorated everywhere, as the books I had read had cast him in a rather unfavourable light. I have since read a lot more, and the film "Bernadette" by Jean Delannoy helped to show what an awkward spot he was in to begin with, and how he really defended Bernadette once he became convinced the Apparitions were genuine.

There's a great account given in one of the books I read... Bernadette had reported that the lady had asked for a chapel... only, being a little discouraged by the priest's expression, she added that it didn't have to be big, "just a little one!" Dean Peyramale declared that he wanted a sign: if the bush in the grotto could be made to bloom, in February, then she could have her chapel... "And it won't be a little one. Oh no, it will be a nice big one!" said the Dean, who didn't believe in being shabby...

This is so often the attitude of the saints (and so often at odds with the post-Vatican II liberal trendies) - poverty was observed only in their private lives. Everything for the worship of God was the very best that could be afforded. Churches, chalices, monstrances, tabernacles, altar cloths, vestments... all made of the best, most precious materials, and decorated with care and love... There seems to be a lesson (or two) in there somewhere!!

Fine, now, upon whom shall I inflict this...?

If you liked "The Sinners Guide" you will also appreciate "Summa of the Christian Life."