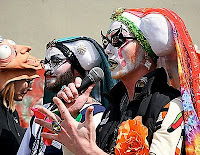 In an attempt to avoid starting the Lord's day with various expletives, as well as not wishing to be in a vile temper all day, I shall have to refrain from having the radio on tonight...

...I normally sleep with the radio on low in the background, a habit I picked up when I was seriously ill (about 15 years ago now) as it helped to hear the passage of time through the small hours. I'm usually tuned to Radio 4, which turns into the BBC World Service between 1am and 5:30am. Sunday morning involves a gradual return to consciousness, accompanied by Sunday Worship, which is a prayer service of varying description (occasionally it's a Catholic Mass) and the dawning realisation that I can have a lie in (I go to the Sunday evening Mass.)

Tomorrow, however, is going to be something to avoid like the plague:

"Fr Donal Godfrey, S. J., leads a service from the Catholic Parish of Most Holy Redeemer, San Francisco, exploring how gay people can find a place in the Christian narrative and speak of the gift of faith. The preacher is the Catholic writer and theologian, Fr James Alison."

My likely reaction might result in the radio hitting my cat or my bedroom window (I won't have my contact lenses in at that time) so I think Sylvester (and my landlord) would prefer that the radio remains "off"...

Mantilla-twitch to the Caveman and to Credo
Posted by Mulier Fortis on 28.4.07

Nothing really to do with the post. But I`m glad to see that I`m not the only one who has the radio playing low in bed to get me to sleep.

I usually switch between Radio 4, the World Service, Classic FM, and BBC Five till I find something ....

I can completely agree with you Mac.

Whilst I think it is very important to engage in dialogue so that the proper attitude towards gay people can be made clear and underlined, I think it is wholly inappropriate to broadcast this as the main radio worship segment thingy. (Make sense?)

Have a fab day. Why not ignore all media today? I often do that.

As an American living in Britain I always regarded the BBC as a kind of Stalin-esque organization. Full of men in grey suits who had been educated at the party's universities (Oxbridge) and who ran the state funded propaganda machine very effectively indeed.

This, combined with the draconian broadcast license regulations which limit who can broadcast and (for instance) do not allow religious organizations to hold radio licenses amounts to state control that the communists would have been envious of.

The BBC is, and has always been, a mouthpiece of urbane British secular humanism. The religious broadcasting it does is usually shallow, condescending and politically correct in the extreme.

It's good for one thing: putting yourself to sleep.