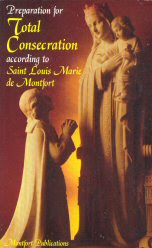 I may have mentioned before that I'm rather keen on St. Louis Marie de Montfort. I have a rather large tome with his collected writings, and I love just opening it at random to see what pops out...

...for example, in "The Secret of the Rosary," I found this little snippet:

"Even though God has set his seal of approval on the Rosary by many miracles, and though it has been approved by the Church in many papal bulls, there are only too many people who are against the holy Rosary today. Such are free-thinkers and those who scorn religion, who either condemn the Rosary or try to turn others away from it.

"It is easy to see that they have absorbed the poison of hell and that they are inspired by the devil; for no one can condemn devotion to the holy Rosary without condemning all that is most holy in the Catholic faith, such as the Lord's prayer, the Hail Mary and the mysteries of the life, death and glory of Jesus Christ and his holy Mother.

"These freethinkers, who cannot bear to have people saying the Rosary, often fall into an heretical state of mind without realising it and come to hate the Rosary and its mysteries."

In "True Devotion to Mary," St. Louis aimed to show the role of Mary in the plan of God, in one's life as a baptised person and in one's apostolic life. He teaches that, as Mary is, of all God's creatures, the most conformed, united and consecrated to Jesus, so devotion to her makes for the most effective conformity and consecration to Jesus. The "True Devotion" in the title consists of giving oneself entirely to Mary in order to belong entirely to Jesus through her, the perfect renewal of the vows and promises of Baptism.

"We give [Mary] all that we possess, both in our natural life and in our spiritual life, as well as everything we shall acquire in the future in the order of nature, of grace and of glory in heaven. This we do without any reservation... we give for all eternity without claiming or expecting, in return for our offering and our service, any other reward than the honour of belonging to Our Lord through Mary and in Mary..."

This is where Pope John Paul the Great's motto came from: Totus Tuus (totally yours)

This total consecration isn't to be taken lightly: St. Louis said that twelve days should be spent preparing by emptying oneself of the spirit of the world, and then three weeks should be spent being imbued with the spirit of Jesus through Mary. Altogether, not including the day of Consecration itself, thirty-three days are needed for the preparation period. Consecration is supposed to happen on one of the major Marian feasts, or on St. Louis' feast day, so the possible "start dates" are fixed...

I undertook this Consecration two Summers ago. I meant to renew it last year, but lost my little pocket book with the scheme outlining the prayers and meditations for the preparation period (I have the vague feeling I lent it to someone...) and then got rather caught up in events with my new job...

However, I wanted to renew my Consecration this year, and, as it so happens, a friend of mine emailed to ask if I'd ever thought of doing the Consecration: she was keen, but needed some encouragement and support. She'd thought of starting on the feast of St. Louis, with the idea that the period of preparation would end while we were in Lourdes. I pointed out that the Consecration dates were "fixed" but noted that the Feast of the Visitation happened while we were out in Lourdes, and that this was one of the fixed dates...

Fr Tim has agreed to lead a little ceremony of Consecration at Mass on the Feast day, and the fact that we will be able to do this in a place where Our Lady actually appeared is just the chocolate icing on the gateaux...

So, tomorrow it starts. Your prayers for the successful completion of this Consecration (and renewal) would be greatly appreciated...
Posted by Mulier Fortis on 27.4.07

Tomorrow I complete the 33 days preparation for consecration. This is the 4th time over the past 20 years where I have completed this.

Of course the freaky thing is that I have the same book sitting on my desk for the very same purpose.

Prayers for you both!

Prayers? Of course! A Novena to St Louis begins today.

What a coincidence Mac! Right now my video is playing a bio-documentary about the man himself that was on EWTN this morning! I have visited his tomb at St-Laurent-sur-Sevres. Well worth a visit; Cholet is the nearest train staiton, but you would need your own wheels from there.