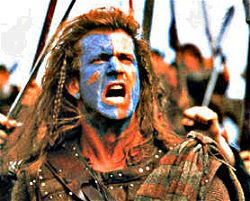 Something happening north of the border?

This morning I noticed a new blog (a genuinely new one, that is, not just one I hadn't spotted before) as I tracked back through some of the comments on other blogs. Mark, who describes himself as a Scotsman who works for the police, has started Rise and Pray, on which he promises to start posting properly in 2007... though he just couldn't resist putting up the odd snippet!

And then the tired PP from Valle Adurni has noticed that the Scottish Cardinal has been flexing his muscles (I'd be interested to hear what the clerical equivalent of muscle-flexing might be... have a go in the com-box!!) Anyway, Pastor in Valle has spotted an encouraging article in the Scotsman

Beyond that, there is the question of our identity and self-perception. A medieval peasant, living in harsh conditions, believed his soul was immortal. That gave him an immeasurable dignity and a huge sense of responsibility: the need to ensure his salvation for all eternity. Today, when a Nobel prize-winner will most likely believe he will end his existence at the moment of death, like a cat or a dog, such a reduced self-esteem must have enormous implications for humanity in the developed world. We have gained some 30 years of life expectancy through advances in medicine, and lost an eternity.

Christians, however, have retained that dignity. Unlike God, we had a beginning; but, for better or worse, we believe part of us will continue to exist throughout eternity. That is an awesome concept which must radically influence any believer's perception of himself, investing him with a majestic cosmic destiny. That is the background to tonight's salutation of the Saviour, as lyrically expressed in the prayer at Midnight Mass, taken from Psalm 109: "With thee is the principality in the day of thy strength: in the brightness of the saints from the womb before the day-star I begot thee."

...and then there are all those Scots who blog! The Scots who turn up for the Faith Winter Conference in Stonyhurst and the Faith Summer Session at Woldingham are a pretty neat bunch too...

Seriously, though, thanks for the mention. I'll write properly in the next few days, but one of the reasons for creating this new blog has been to create a safe space where I can write about where I'm at yet, yet at the same time be open to comments from all-and-sundry. (I've previously been on a closed-system, where I've found it stifling to say the least!)