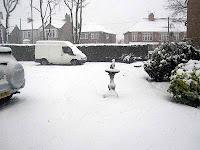 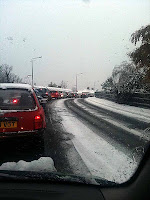 (We can't cope with rain, Autumn leaves, fog, or sunshine either, but snow appears to be a speciality!)
Posted by Mulier Fortis on 1.12.10

The trick, it seems is to go and pray at the abortuary when it snows, as most got there without too much trouble. See http://ecumenicaldiablog.blogspot.com/2010/12/pro-life-vigil-in-snow.html

My sympathies. I went out this morning to clear the snow from our driveway and fell on a patch of ice, banging my lip on the handle of the snow shovel...blood on snow..and a big thick bruised lip. I should have known better, the snow melted anyway.