After the events of last night, I found it pretty difficult to get up in time for Mass. The first indication that Sylvester was still feeling poorly was shown by the fact that he hadn't, as is his usual custom, jumped onto my pillow to demand food. I discovered him still lying in the cat basket.

He did manage to get himself to the kitchen to eat a little breakfast, which was reassuring, and so, realising that there was little I could do for him anyway, I left for Mass and Exposition. 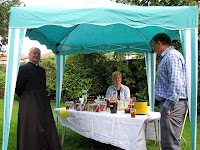 The ladies of the UCM had arranged to have a Cream Tea & Sandwiches event in the Presbytery garden after Benediction. I wanted to check on Sylvester, so I drove home. He was still sleeping in the cat basket, but purred when I stroked him, and I noticed that he'd eaten a little more food. Reassured that I wasn't going to have to drive him straight back to the vet, I went back to church for lunch.

After all the excitement, I figured that a little alcoholic refreshment would be in order, and, as the sun was shining, I went out into the garden, where a little marquee had been set up as a "Beer Tent" - although most people were drinking Pimms. The majority of people stayed in the small hall, as it was a little on the nippy side, but, when the sun came out it was beautiful. We all chatted about the success of the Holy Father's visit, and I recounted how Boosey & Hawkes, James MacMillan's music publishers, were really on the ball, as they had contacted me on Twitter after noting that I liked his music, as well as starting up a "Spot James MacMillan" thread - he did seem to have attended pretty much everything! Fr. Tim then decided to adopt the classical "looking into the distance" pose which seems to be a favourite... 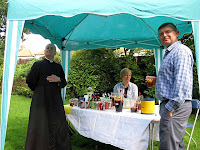 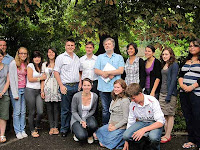 His Hermeneuticalness did his best to look pastorally sensitive as I recounted my midnight escapades... 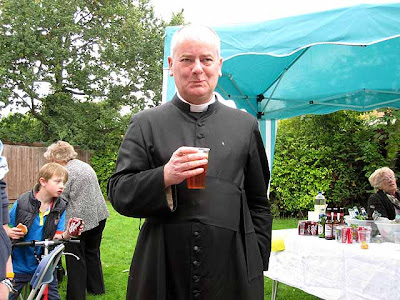 He, Jonathan (Blackfen's Senior MC) and Greg (of the Dangermouse socks) did their best to keep my spirits up by cracking jokes about Sylvester-vindaloo versus Sylvester-biryani and a full Requiem Mass with absolutions at the cat-afalque. I hasten to point out that it was all in jest, and I'm sure that, had I been in floods of tears, they would have been more than sympathetic... As it was, they really cheered me up.

I managed to catch a few of the UCM ladies having a brief break after they had cleared everything away... 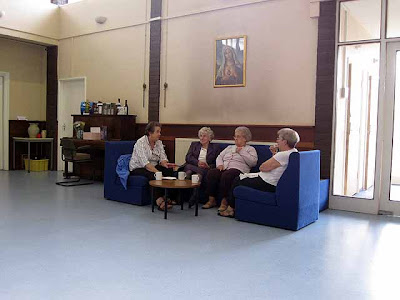 When I got home, I found Sylvester sleeping again, and decided that I could probably do with a short nap myself. Later on, I woke up to find Sylvester on my pillow, which was wonderful. He's still looking frail, but perhaps he's not quite ready for that Requiem...
Posted by Mulier Fortis on 25.9.10

A St. Benedict's medal placed near a sick animal may result in a God-speeded cure. Our sheep dog got a Nasty Burn (her skin split). Lots of expensive treatments later, and she was still unable to sleep properly and was miserable. I put a St. Benedict's medal next to the burn. Pity that I didn't take photos! Against all expectations, the burn healed Really Quickly. The fur has never grown back and the skin is a off-colour.

So glad to know that things are looking up with Sylvester, Mac : missed the news last evening because I collapsed rather early, but no doubt the prayers of this morning will have done no harm, anyway !

I had a similar problem with Pumpkin. Turned out he had swallowed a small bird whole, and it was stuck in his colon! A kitty enema took care of the problem right away.