After the dinner at Chislehurst in honour of the Holy Father's visit, I popped over to Blackfen in order to wave off the pilgrims leaving for the Beatification Mass at Cofton Park. Why they had to leave at 12:30am is anyone's guess... I know pilgrims from Folkestone who had to leave at that time, so, given that it takes me about 2 hours to get to Folkestone... 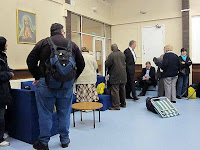 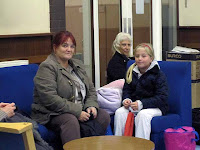 I opened the doors to the hall, turned on the lights, and nipped into the loo. I came out to find pilgrims already congregating: they'd been warned by Leutgeb that the coach would leave on time whether they were on it or not, and so they jolly well made sure they were not going to miss the event of a lifetime! 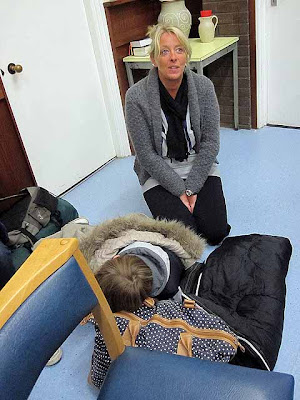 Some of the younger ones had also been to Hyde Park, and were catching up on sleep... I think this one was carried onto the coach by his dad, still oblivious to the world... 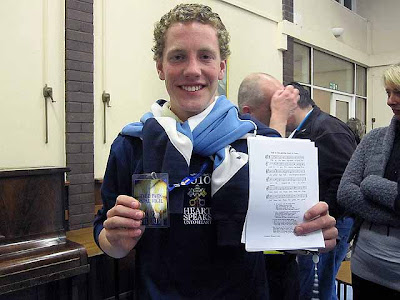 Greg, the server who sports the Dangermouse socks which so enthralled Fr. Z, came back from Westminster Cathedral piazza and Hyde Park looking a little the worse for wear, but still having enough energy to show off his Papal Visit Youth Pass, as well as copies of the words to God bless our Pope! which they planned to sing at some point. I vaguely remember, as a student, having that sort of energy... And then the coach arrived, and it was time to see everyone off... I'd made a bit of an effort for the dinner at Chislehurst - hair up, (low heeled) black court shoes, pearl earrings and matching choker, make-up - but I hadn't realised how unusual a sight it was until some of the young girls confessed to feeling under-dressed. "We didn't know we had to dress up!" they wailed, "...if only we'd known...!"

I did my best to reassure them that, given the conditions and the terrain, they were far more suitably attired. Still, it did make me wonder what sort of a spectacle I must present normally...
Posted by Mulier Fortis on 20.9.10