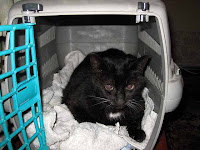 Thanks for the concern about Sylvester's progress. This morning he seemed a little stiffer than he had been yesterday - I assumed that the painkillers had worn off.

Unfortunately, he attempted to jump down from the kitchen counter by the cat flap, and promptly flopped over onto his side with a cry of pain. I have the sneaking suspicion that he's done something similar to me, either tearing a muscle or a ligament. Just now, when I checked on him, he started yowling, and then he sought refuge in the cat basket: I have a feeling that I shall have to keep him caged up in it for a few days.

I've just phoned the emergency vet near me, and have been instructed to bring him over in about an hour for some more painkillers and a further checking over...
UPDATE: Just back from the vet - Sylvester really didn't like the poor lady and hissed and spat... rather ungrateful of him, since she gave him more painkillers. I have to bring him back tomorrow for further assessment.
Posted by Mulier Fortis on 26.9.10

I have to admit to being increasingly concerned, Mac; simply because I know from experience that increasing age makes a cat's handling of this sort of thing slower and less effective . . .
Love & Prayers for you both. xx

Do let us know when Sylvester has had this second consultation.

Sending up a wee prayer for wee Puss!

Yes, I used to pray for my cats to St. Francis. I hope you are able to find out what's wrong with Sylvester soon. Keep us posted. I've said a prayer to St. Francis for him.

I've said a prayer too. I pray for cats to St Martin de Porres - the only saint I know of who set up a shelter for stray and sick cats.

Check under his fur to make sure he has not been attacked by a fox. Might seem bizarre, but the first vet I showed my dog to did not spot deep scratches or bite marks. The second one, fortunately did.

Other possibility not already mentioned is a bike.