Seeing In The New Year At Blackfen... Properly !

The previous post should, I suspect, really have been headed "Seeing Out The Old Year," concentrating, as it does, on the events of New Year's Eve.
There seems to be quite a bit of discussion over whether the next decade starts this year or next. I know the logic of saying we count to ten starting with the number one, but, on the other hand, time seems to work differently... the 20th century was the one where all the years began with "19" for example... and, when referring to "the twenties" we mean the period 1920 - 1929... 1930 belongs to the thirties!
Whether you consider this to be a new decade or not, it is indisputably a new year. I was able to start the New Year in the best possible way, although I nearly came unstuck: the days are a bit weird at the moment, and I thought that Mass at Blackfen was at 10:30am (the time for Saturdays and Sundays...) I suddenly realised that today was Friday, which meant that Mass was actually at 10am. I scooted in to church just as Fr. Tim started with the Sign of the Cross: not the best way to start Mass...
At the end of Mass we sang the Veni, Creator Spiritus... I love this hymn, but it's very tricky if you don't have the music, as I haven't quite figured out the rules for which syllables have more than one note.
Mindful of the fact that I didn't want to make a complete idiot of myself, I tried to move away from the camera (hence I missed the intonation of the first words at the start, and the camera was shaking until I got it balanced) and I didn't sing for two or three verses... and then I realised that the singing was faltering a bit, and I tried to join in again quietly... The problem is, as a soprano, I find it difficult to sing high notes quietly... and, to be honest, I find singing anything quietly well nigh impossible...
I then felt that I needed a good dose of the Extraordinary Form to set me up for the year, and I headed off to St. James' Church, Spanish Place for High Mass. I left the car at North Greenwich Station as I thought the Oxford Street sales would be in full swing, and caught the tube down to Bond Street, and walked the short distance from there.
Last time I was at Spanish Place, I had forgotten my monopod, and found that it was difficult to get really sharp images in the dim light. This time I had come prepared, and it had the added advantage that I could get the camera up above the heads of the congregation for the video... and, to a lesser extent, for the photos - though the height was limited here by my having to press the camera button!
This time the Veni, Creator Spiritus was sung before Mass, and I captured it on video. The choir were superb, so this time I just listened.

I managed to get some good photos... 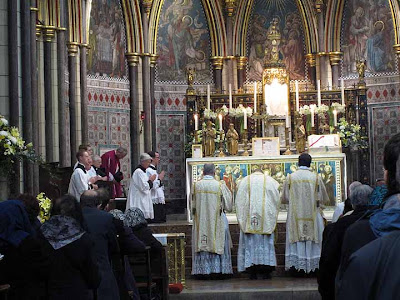 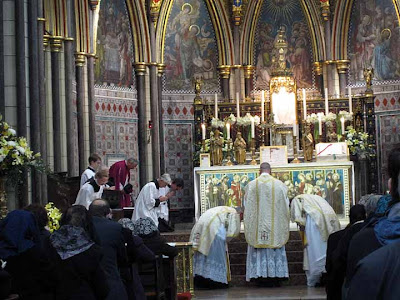 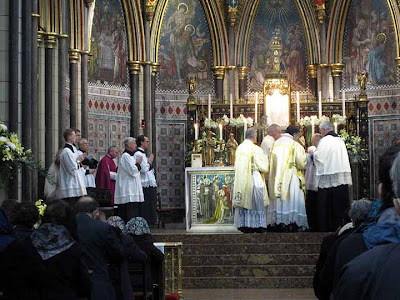 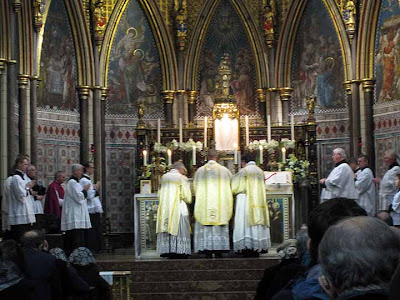 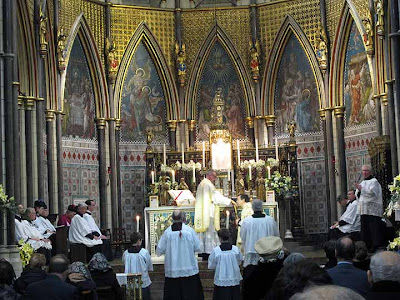 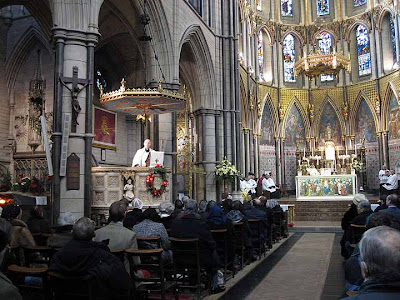 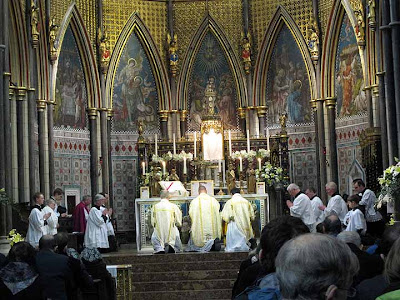 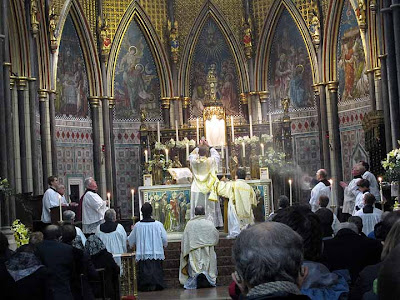 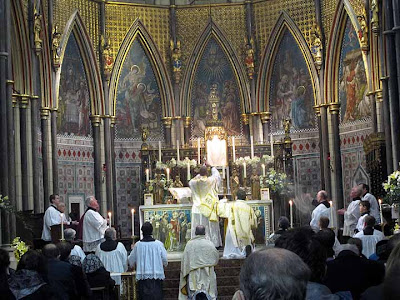 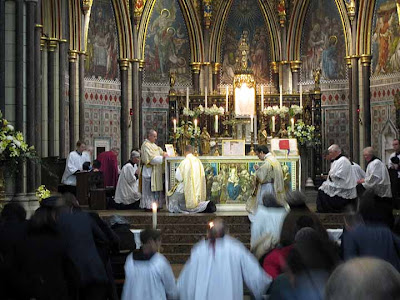 In addition to His Hermeneuticalness assisting as subdeacon, there were four servers from Blackfen privileged to serve on the sanctuary, Patricius being one of them. Two of our younger servers were acolytes (I think that's what they were!) and they consented to pose for a shot afterwards with their parents... 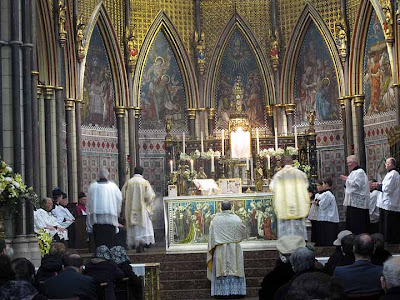 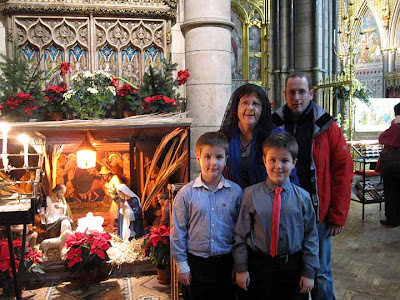 I've only just noticed that a few of the photos are a bit crooked, but I'm too tired to try and sort them out (I took over 100 photos.) I also managed to get a few other photos inside the church... 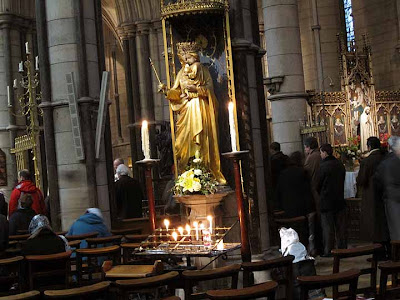 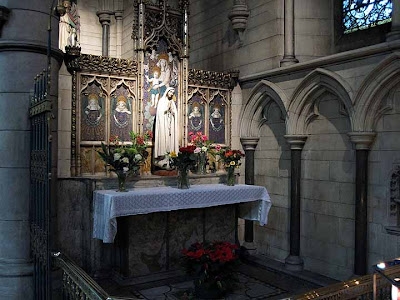 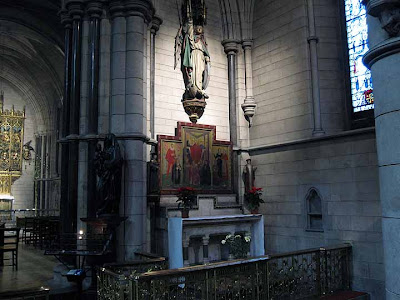 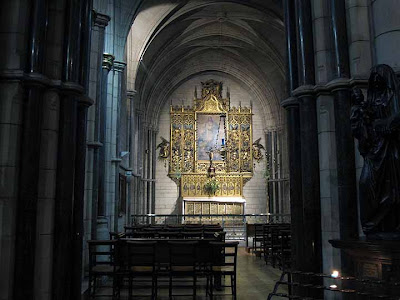 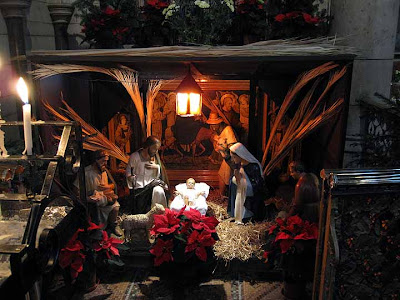 And I think that the Crib is a fitting point at which to end this photo-fest!
Posted by Mulier Fortis on 1.1.10

Lovely photos Mac. I particularly like the beautiful crib.

Are you able to take them without a flash on your super new snazzy camera? I can't manage 'flash-less' photography on my camera and so never take any photos during the liturgy although I often have a very good view.

It was a privilege to serve there; it is such a beautiful church. Maybe one day they'll have an Old Rite Mass too!

Miss Ellen - oh yes, I would hate a flash to distract anyone from the liturgy.

I also have the facility to switch off the click when the photo is taken - even though it's a small sound, with the number of photos I take, it would be irritating. It's the reason I loathe Fr. Tim's big monster camera (he occasionally wants super-dooper quality shots) !

Correct me if I am wrong, but Mass is said in Latin every Sunday at 9am or is it 9.30am.

Sorry, Elizabeth, wrong on both counts... Mass is in the Extraordinary Form every Sunday at 10:30am.