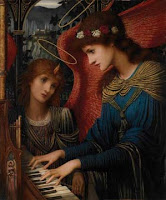 It's St. Cecilia's feast day today. Unfortunately, today being Sunday, she gets ignored in the Ordinary Form calendar; I was, however, delighted to hear her mentioned in the second collect at the Extraordinary Form Mass we had this morning in Blackfen. It is one of the (many) things I love about the Traditional Latin Mass: that more than one event can be celebrated on any particular day. 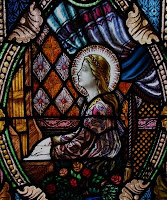 Going through a few old posts, I see that I wrote about the story of St. Cecilia's martyrdom a couple of years ago. I don't know is why she became the patron of Church music, but, as I love to sing, and as most of the songs I know are religious, I have a particular affection for St. Cecilia.
In previous years, when I've renewed my vows, I have had the litany of saints recited, and have been able to choose my favourite patrons. This year I shall be having the litany recited according to the older form, and apparently the list is set, so some of the more recent saints won't get a look in. At least St. Cecilia, being one of the early Roman Martyrs, will still be included! 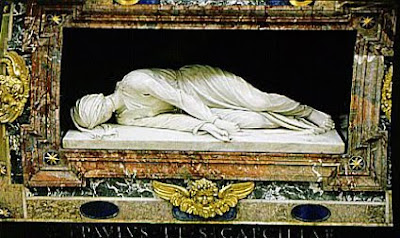 Patron Saint of music because she wouldn't stop singing when being beheaded, I understand, from my HoD.

That third pic may show cuta in her neck.

Thanks for the info Leutgeb... I found the pictures on Google Images... and saw later that you'd picked the same one (great minds and all that!)

Fr. Brown - it's the old rite celebrated properly... if you catch my drift.