Tomorrow sees the start of our Parish Pilgrimage to Lourdes. I'm still feeling quite tired and washed out, so I haven't been as excited as usual: however, I know that it will be a wonderful time (it always is) and the excitement will probably hit me some time in the night, when I'll be unable to sleep for fear of being late.
I always have a fear of being late... and it is very well-founded, as I could probably sleep through the Parousia. I have a large, old-fashioned, wind-up, bell alarm clock, a small, beeping, travel alarm clock, a radio alarm clock (which is set to beep, as I wouldn't wake up with just the radio) and three alarms on my mobile phone. I generally find that I've slept through a few of them without noticing, or (and this is the scary part) switched them off in my sleep. There's no point saying that I should put them across the other side of my bedroom... I've tried that, and I just ignore them as they're not close enough to be annoying.
I might ask one of my friends to phone... just to make absolutely certain!
Meanwhile, I am racking my brains to see if there is anything I have forgotten. I have my own travel insurance, EHIC, passport and holiday money. I've asked my neighbour to feed Sylvester (she is a real cat-lover, and will wait with Sylvester while he eats his food, and will also spend time with him in the evening) and have arranged for my landlord to come and plaster up the holes left by the electrician...
I haven't packed yet - partly because I don't want to tip off Sylvester too soon, but also because I'm trying to take only what is absolutely necessary... and much of it will be necessary in the morning! 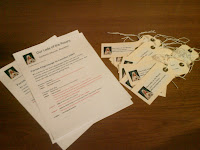 I have printed out notices for the hotel noticeboard, detailing each day's activities along with the next day's events, and then any last-minute changes can be made clear. They look quite good - we have a "corporate logo" which is eye-catching! The same logo appeared on the letters I sent everyone and on the programme, and the parish flag has the same picture of Our Lady on it. I've also produced matching luggage tags, so that our bags are easy to identify... one year, an elderly monsignor from another group picked up one of our bags by mistake!
In previous years I've done little cards with the Booking Reference printed on it, but we'll be checking in as a group this time, and we all have the same number, so I haven't done it... I might live to regret that!
I will be in the Grotto waving at the webcam on Tuesday at 1:50pm* and on Thursday at about 4pm (after the Rosary and blessing of children has finished) - obviously I'll be at the Grotto more frequently than that, but those are the two definite spot-the-mulier-fortis moments!
Wendy (one of the other pilgrims) offered to produce hymn sheets/booklets, Jonathan promised to get the Mass texts printed off for everyone, and we're taking the red Missal booklets from church (they won't be used in the parish during the week) as Mass will be in the usus antiquior. Servers will be responsible for their own cassocks and cottas... yes, I think that is pretty much everything...
Famous last words...
*All times are local - France is currently an hour ahead of the UK on BST, which makes it GMT + 2 hrs (I think that's how it works!)
Posted by Mulier Fortis on 24.5.09

I'll pray for you to wake up on time! Have a great pilgrimage.

Have a lovely time. I've bookmarked the webcam so all I have to do now is remember to check in at the appropriate times!

Will you be the one in the mantilla?

Heheheheheh... not unless the Blessed Sacrament is present...