All Good Things Must Come To An End...

...but I'm still making the most of my holiday.  One day left.  I did seem to spend the first part of the week sleeping!
On Friday I went to Corpus Christi, Maiden Lane.  I'd been told by a couple of the chaps from our visiting schola that Corpus Christi were having a "Quarant'Ore" (I think that's how it's spelt) and it seemed a particularly good way to spend All Hallow's Eve (I am not of the "it's all good, harmless fun" opinion.)
Unfortunately, Friday was the middle of the three days, and so Mass was very low-key, and there wasn't a procession or a Litany.  Even more unfortunately, the church itself was very dark, except for a few very bright spots, which meant that the photos I took were totally useless.
The Mass itself was very moving, of course.  The more I attend Mass in the Extraordinary Form, the more I love it.  Every movement, every gesture, seems to be laden with meaning, spanning two millennia.  It truly is the "Mass of Ages." 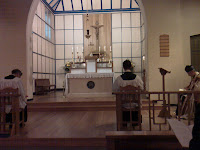 Today was the first Saturday of the month, and so we had our regular Missa Cantata with the visiting schola... but there was an added bonus: as it was the Feast of All Saints, it was decided that we should have sung Vespers in the afternoon... and as it would be mean to make the schola hang around doing nothing, we had lunch in the parish hall... lasagna and garlic bread (with side salad for the health-freaks!)
I had a nasty scare at the beginning of lunch: I'd deliberately left my car at home so that I could indulge in a pint or two of Novus Ordo Eurofizz - but when I got to the hall, the bar was locked up!  Luckily, it didn't stay that way for very long... 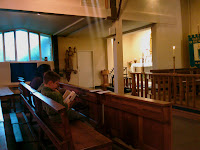 Vespers was brilliant.  I did manage to take a few photos, but they were, unfortunately, on Fr. Tim's camera, so I haven't seen them yet.  No doubt they will appear on his blog in due course.  I couldn't resist taking this shot, though: there had been lots of young families at the Mass, several of whom stayed for Vespers... and these two twins were totally engrossed by the new booklets they'd found at the back of the church explaining the "Old" Mass... I believe that they'll be making their First Communion this year, and after that they're keen to learn to serve...
Posted by Mulier Fortis on 1.11.08