I found this over at La Mamma's place, and decided that I really wanted to play too, under the "anyone else who reads this" proviso!

The rules for this one (it's pretty laid back, as memes go...)
1. Answer the questions! You can give a reason for the answer if you like.
2. As for tagging people, you tag as many as you want or as little...minimum of one. There's no obligation to play.
3. Last of all, have fun! 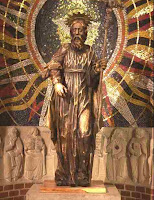 1. First Saint you "met"?
When I returned to the Church, I had a very "Protestant" view of Our Lady and the saints, basically due to my post-Vatican II catechesis. I reluctantly accepted that Our Lady was worth petitioning on account of no nice Jewish boy doesn't listen to his mother. But the first saint I really "met" was St. Jude. After an unfinished and half-hearted novena, he fixed the NHS waiting list for me. You can read more about it (and him) in a previous post.

2. Favourite Saint(s)?
Our Lady goes without saying, though I do have my favourite titles for her. More about them some other time. And then I have a particular affection for and devotion to St. Jude (especially when desperate, or driving), St. Anne Line, St. Joseph (especially when tracking down a parking space), St. Bernadette, St. Teresa of Avila, St. Philomena, St. Anthony of Padua, St. Mary Magdalene (she got a very bad press because of the Da Vinci Code, but it was hardly her fault!), St. Martha, St. John Fisher, St. Thomas More, St. Francis de Sales, St. Alphonsus Liguori, St. Louis-Marie Grignion de Montfort, St. John Vianney, St. Irenaeus, St. Peter, St. Josémaria, St. Maximilian Kolbe, St. Cecilia, St. Juan Diego Cuahtlatoatzin...

3. Patron saint for the year?
I was allocated St. Peter Chrysologus, and to my shame I haven't really bothered to look into him much (yet.)

4. Favourite book by a saint?
Aaarghhh. Difficult choice. True Devotion to Mary by St. Louis-Marie Grignion de Montfort probably comes out tops, with The Glories of Mary by St. Alphonsus coming in a close second and Introduction to the Devout Life by St. Francis de Sales squeaking in third.

5. Saint book you are reading now?
I'm using the Introduction to the Devout Life as an aid to meditation, though I'm not actually reading it at the moment. And I have a few other books on the go at the moment...

7. Favourite Autobiography/Biography of a saint?
Bernadette of Lourdes by Réné Laurentin.

8. Favourite novel/book by a saint?
Already answered in Question 4. 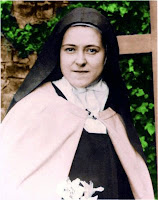 9. Saint (besides your favourites) you'd want to meet?
I think I'd want to meet St. Thérèse of Lisieux. I've had real problems with her autobiography, Story of a Soul, as it too cloyingly sweet for my taste. St. Bernadette was rather more ascerbic, I think, and much more to my liking. However, if I met St. Thérèse in person, I might understand her better, and so develop a devotion to her...

10. Saint you look to for help?
All of them, at different times, according to specific circumstances.

11.Favourite saint quote?
"My Lords, I am accused of harbouring a Catholic priest. So far am I from repenting that I would I could have harboured a thousand." (St. Anne Line, on the scaffold, 1601) 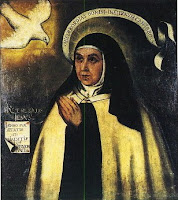 13. Favourite story of a saint?
Lots... but if I had to pin it down...
St. Teresa of Avila was travelling to various convents to sort them out. On one such journey, in really foul weather, the wheel of the cart broke off, tipping everything into the mud. St. Teresa remonstrated with Our Lord. "Lord," she said, "Why do you have to make life so difficult?" Jesus replied, "Teresa, this is how I treat my friends." "Yes, Lord," she retorted, "That's why you have so few of them."

14. If you could go anywhere on a pilgrimage to a saint's homeland, where would it be?
I already visit Lourdes (St. Bernadette's home.) I suppose if I had the chance to go anywhere, it would have to be the Holy Land, as several of my favourites are there: St. Jude, St. Martha, St. Mary Magdalene, St. Joseph, St. Peter...

15. Any Blesseds or Venerables that you would like to become canonized?
Venerable Luiz de Granada (he wrote The Sinner's Guide, and was a favourite of St. Teresa of Avila.)

What a great meme!

I feel the same way about St Therese of Lisieux. Watching the movie made her less annoying but she's still far from my favorite.

Welcome, Mairin... I don't recall seeing you before. Consider yourself tagged if you'd like. Meanwhile, I shall add your excellent blog to my blogroll.

Good answers! Mahalo for the tag. It is one I did already but do appreciate you thinking of me. I love memes :-)

Oh, I like this Meme! And loved your choices. I may do this Meme in a few days time.

Peace & blessings to you this Lent:)

Phew, had me worried for a moment ... it's a meme I am already part way through. See my post titled "Meme about saints". I have got as far as question 5. I will try and progress it a little more in the next day or so.

A Marian aspect seems to be common to many of our answers on this. I did an exercise a couple of years ago reading "True Devotion" and interpreting it in the light of the teaching of Vatican II on the universal call to holiness and the lay apostolate. It reads in an amazingly up-to-date way, though some (I realise not all!) might feel that an "unpeeling" of flowery language is needed in places.

I got a rather knowing smile from a friend in the parish when I showed them the section on Edith Stein ... I do tend to quote her quite a bit!

If you want an awesome book about St. Therese that cuts through the flowery Victorian prose of "Story of a Soul" then get this absolute gem: (It totally explained the Little Way to me after years of gagging over Story of a Soul...)

This is a book everyone should read regardless of their devotion to Saint Therese!!

I had a go at answering the questions here:

I feel I may have come up short in some places, though. Being new to the Catholic Faith, I am still in learning mode, and haven't yet developed a good understanding of many of the Saints.

Thank you! I haven't done the meme yet, but I will.