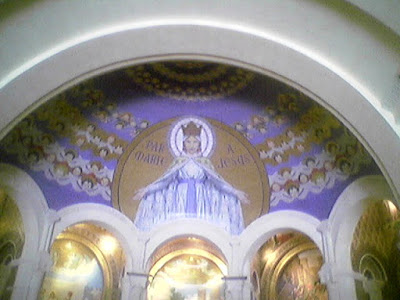 It's that time of year again... I'm organising the parish pilgrimage to Lourdes, which will be at the end of May. We will be there for the Feast of the Visitation, which, I suspect, will be quite an event during this 150th Anniversary Year.

Because of the Anniversary, we had to get things moving much earlier than last year. Fr. Tim announced the pilgrimage at the Masses one Sunday, and then left it at that. We had a really strict limit on the number of rooms the hotel could give us, and it was a case of first come (with firm name and address) first served. Needless to say, all the places were snapped up pretty quickly.

And it'll be a real family affair this year: there are 22 adults and 11 children. I've just sent out the details of flights to each of the pilgrims, and booked the coaches to and from the airports, and sent the final details to the hotel. I can't sort out the itinerary just yet, as the Shrine authorities don't look at the small group bookings until April, after they've allocated chapels and other things to the large diocesan pilgrimages.

I'm getting excited already! I wonder if I should invest in a snazzy camera?
Posted by Mulier Fortis on 18.2.08

So you drew the short straw, huh?