Carolina Cannonball has provided the perfect way to purge all those excesses from your system this Christmas. One look at the Ugly Vestment Competition entries, and you'll be heaving... It's a close contest... mostly because it is difficult to look at them long enough to judge which is the worst. Voting starts now and will continue through to December 20th at noon EST (I have no idea what that is in real money!) All winners will be announced on the 21st. There are three categories: 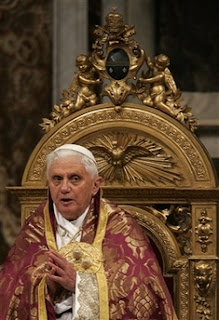 Even if Pope Benidict was in those ugly vestments he has such a sweet face that he would look just fine. Of course, I don't think that I have ever seen him wearing anything that doesn't look nice.

Mine's #38 "welcome to my daymare" in the "men's vestments" category. (They didn't have a "transgendered category") -- have a look at my blog entry first, because if you're on dial=up CC's page brings dial up to it's knees and I want to get a fair shot in

Karen... I managed to get broadband before I got the computer to cope with it! Dial-up sucks.

Ma - thanks for the timecheck!

The good thing about all that polyester is it would go up in flames REALLY quickly. Come to think of it shouldn't one encourage liturgical dancing in that stuff? A bit of friction and the whole lot will go up in flames....

I am suitably horrified by the general and at times eyeball smashing horribleness of these vestment-but the one Karen found in her church's vestry is so bad - I mean puked-pizza is just so last year- that it has to win.