A while back, a certain non-blogging priest found himself appearing on several blogs. We bloggers found it hilariously funny, but Fr. Richard was a little spooked, especially when, visiting Rome, he was stopped in the street by the great Fr. Z with the cry, "You're that Fr. Whinder!" 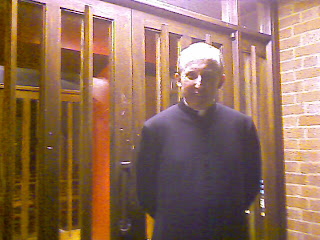 Another priest I know has no such qualms: his ambition is to get on as many blogs as possible... given that one of his brothers is Fr. John Boyle (the South Ashford Priest) and he's a friend of the British Blogging Supremo Fr. Tim Finigan, you'd think he'd have no problems getting on the blogosphere...

Anyway, I managed to catch up with him the other evening for a chat over a cup of tea, and he obligingly posed for a photo...

Fr. Stephen Boyle is Parish Priest of Good Shepherd Church, New Addington. New Addington is one of those strange places which exist on the outskirts of London: it's residential, but no real amenities, lots of houses, but no shops, not even a local newsagent. The most noticeable thing in the area is the tram station which goes into Croydon... 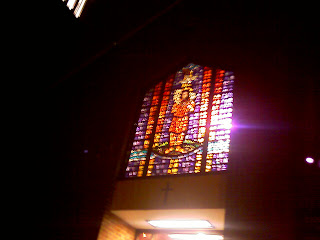 ...the church is tucked away in the backstreets, and despite its having a huge tower (I keep forgetting to ask if it has a working bell), you wouldn't find it unless you knew where to go.

I was delighted to see that Fr. Stephen believes in letting his light shine free of bushel: the beautiful stained glass window is backlit at night, so the image of the Good Shepherd shines out for all to see. I don't want any snippy comments about wasting electricity or carbon footprints: the locality is ghastly, and seeing the church window lit up in such an architectural desert is a heart-warming sight...
Posted by Mulier Fortis on 15.12.07

Ah! I saw Fr. Stephen over at Fr. Tim's blog - re: the Penance service organized for the school kids. I wonder what it's like for brother priests if they confess to each other. If in a car going over a cliff I'd think for sure....but maybe or maybe not on a regular basis. "Whaddidya do that for John?/Stephen?" I might think sometimes your confessor can know you TOO well...or maybe not!

I gather it is regarded as bad form for a priest to hear the confessions of members of his family.

Dunno how that works. I think I remember some priest saying he was very humbled when his own father came to him for confession. Whether it was a regular occasion or not, I couldn't say.