Karen, that gem, has tagged me with this rather long meme... ordinarily, I'd have wimped out, but I haven't done a meme for ages, and I'm still suffering from blog withdrawal symptoms, so... 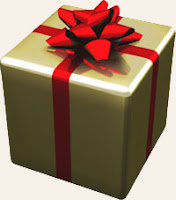 1. Wrapping paper or gift bags? Wrapping paper for most things. I used to be a famous wrapper-upper in my family. Gift bags are superb for bottles though.

2. Real tree or artificial? Always real in my childhood... mind you, artificial trees were really gross when I was a kid. Then I went through a phase of having my own artificial tree - no point having a real one since I went to my mother's for Christmas. Now that Sylvester is on the scene I don't actually put a tree up, because of what he might do in my absence...

3. When do you put up the tree? Family tradition dictated that the tree went up on the afternoon of Christmas Eve. Which is sensible, given that it was always a real tree... and this was before the slow-dropping-needles varieties were available. Now I've come back to the church and I follow the liturgical calendar, no Christmas decorations go up until December 17th.

4. When do you take the tree down? Doesn't apply now... but my mother used to whip the tree down pretty much the day after Boxing Day. I now leave my decorations and cards up until the start of Ordinary Time. 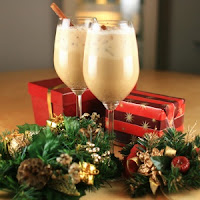 5. Do you like eggnog? Urghhhh! No thanks... I'm more of a Bailey's girl myself. However, I must confess to only having encountered the vile Advocat eggnog, which is virulently yellow, and as revolting to taste as it looks. Scanning Google images for eggnog, however, has revealed some interesting concoctions, so maybe I should reserve judgement...

6. Favourite gift received as a child? I think my all-time favourite was "Basil," received when I was 16. Basil was a Design Centre skeleton. I had asked for a skeleton (I wanted to be a doctor) but my mother was scared of skeletons, so I was resigned to going without. Basil was a complete surprise... a sort of origami version, joined together by brass paper tacks and clever folds, and all the bones had their names printed on them. It took me a couple of days to put him together (he was life-size) and he hung from a hook behind my bedroom door. My mother regretted buying Basil: he was far more lifelike than she'd been expecting. I adored him. I've never seen another one exactly the same.

7. Do you have a Nativity scene? Yes. Goes up on December 17th (second part of Advent) but baby Jesus doesn't make an appearance until after Midnight Mass! Comes down when Ordinary Time starts.

8. Hardest person to buy for? My stepfather. My stepfather is terribly fussy. My mother has problems deciding what to buy him, and any good ideas she tends to keep to herself...

9. Worst Christmas gift you ever received? I think I can honestly say I've never had a bad present for Christmas... but then I don't really go in for exchanging presents with anyone outside my immediate family members.

10. Mail or email Christmas cards? Snail mail... if I remember to write them in time, and actually get round to posting them. I have been known to find pile of cards in January, written and addressed, but not stamped... I am spitting feathers at the moment, as I have just discovered that my version of Microsoft Outlook (on which I store all my contact details, as it is compatible with my phone) is somehow not compatible with my version of Microsoft Word (2007 version) so I'm unable to do a mail merge for the address labels...

11. Favourite Christmas Movie? I don't think I have one. I used to be very cynical about films, especially Christmas ones, as I loathed sentimentality and didn't believe in God. I am now busy rediscovering the true meaning of Christmas (a bit like Scrooge.) I have just bought "It's a Wonderful Life" about a man who is prevented from committing suicide on Christmas Eve by an angel called Clarence (who hopes, thereby to win his wings!) Very corny, but strangely uplifting. I'd seen it on TV a few times, but never all the way through. I also like "While You Were Sleeping" about a woman who saves a man's life on Christmas day (hmmmm, I sense a theme here!) and somehow gets mistaken for his fiancée, as he's in a coma. In true corny fashion, she falls in love with his (much nicer) brother, who doesn't want to make a move on his brother's supposed intended. Very funny. Very uplifting.

12. When do you start shopping for Christmas? Usually the December pay-day. This year it's the 21st December, which means that it's going to be a bit of a rush!

13. Have you ever recycled a Christmas present? No. With my memory, it'd be too risky... I'd probably return it to the giver. But I've never been given a present which I didn't like.

14. Favorite thing to eat at Christmas? The little sausages wrapped in bacon. I love those!

15. Clear lights or colored on the tree? My mother is German. She believed in real trees... and real candles. The candle-holders were tiny, and from Germany. You couldn't buy the candles in this country, and so we would be sent supplies for Christmas in a parcel from my grandmother. The rule was only silver tinsel, and baubles were silver, gold or red. When I had a tree, I didn't have the real tree or the real candles, but the lights were imitation candles, so they had to be clear ones. Strangely enough, now my mother now goes in for more gaudy decorations...

16. Favourite Christmas song? Ooh... "Hark, the herald angels sing" because I love to belt out the descant... though I don't do that often, especially if there is a choir singing (assuming I'm not part of it) as it might clash with whatever they're singing, and that would be rude. I also love "Silent Night" (sorry Karen!) but in German. The English words don't sound right.

17. Travel at Christmas or stay home? Travel, usually... one year to my sister and brother-in-law's house, but usually to my parents' place. It's not too far - Eastbourne is about an hour and three-quarters' drive away. Last year we celebrated Christmas early as my sister was expecting, and didn't want any nasty (or nice) surprises for Christmas itself, so I was on my tod at home. 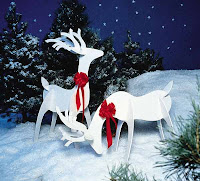 18. Can you name all of Santa’s reindeer? I used to be able to as a kid, as we had to learn it for a song at my last Primary School production... now I can remember Dasher and Dancer, and Prancer, and Donner and Blitzen (I might have been the only child to know what those two meant! Oh, and before you say, "No, it's Donder" I'll just point out that it depends on the version you know... Donder is the Dutch for thunder, but Donner is the German... and the Dutch version of the name of Donder's partner is Bliksem!) Rudolph was a late addition... but no, I can't remember them all.

19. Angel on the tree top or a star? Star. The angels these days look too much like fairies... and I wouldn't want to upset St. Michael and his crew... anyone who can scare the heck out of a bunch of burly shepherds is not to be trifled with...

20. Open the presents Christmas Eve or morning? Family tradition was midnight. But then we weren't a church-going family. I rather upset the applecart these days by insisting that I go to Midnight Mass, which has been the source of a few family rows. Now I have my own transport and am not reliant on trains (which don't run on Christmas Day), I go down to my parents on Christmas Day itself, thus circumventing the rows... being a night owl rather than a lark, I'd happily open presents after Midnight Mass... but as "Auntie" I won't be the one setting the traditions...

21. Most annoying thing about this time of year? Crowded shops... I mean, how dare people leave all their shopping until I'm doing mine! Oh, and the fact that Easter eggs hit the shops on Boxing Day or thereabouts!

22. Best thing about this time of year? Midnight Mass. I love it. Christmas carols sung in church are good too. And the excitement of very little children.

Ok, I am going to tag Leutgeb, Hilary White, the original Catholic Caveman, the Curt Jester, Fr. Justin, Fr. Paul and Fr. Ray. Don't forget to post a link in the combox when you're done!

UPDATE: Hilary has cried off on the basis of not having experienced "Christmas" as such since she was 15. That's pretty gruesome. Leutgeb has protested that it's like sitting an exam on Christmas, but I think she'll complete the meme eventually. The Curt Jester has completed his meme (with much more succinct answers than mine) which you can find HERE. Four down, four to go...
Posted by Mulier Fortis on 9.12.07

Cool! I figured having abstained for a week you might snap to the fly as a rainbow trout. I have to cede good point on Silent Night IN German (which we don't get often enough, you're right the words aren't as sappy.) I like O Tannenbaum and Es Ist Ein Rosensprungen too. The last of these we USED to get with our previous organist and her husband. In German. But not with the "dynamic duo" we have now. Drat. I forgot those bacon wrapped sausage thingies. I love those too. Did you name "Basil" or did he come with that name? :-D Vixen, Comet and Cupid want you to know they are the other three. It's a wonderful Life is a real treat. I like the bit at the end where the angel shows him what life would have been like without him. "...and all those people on the troopship died, because you weren't there to save Harry...."

Karen, you read me like a book. I jumped on that meme this morning in case it got away!

Basil was my name for the skeleton, after Basil the Rat in Fawlty Towers (a very funny British sitcom - see this post...)

Mac,
My meme on this one would be HORRIBLE!!!! Just about every answer would be "my wife takes care of that".

Could you hit me on a different meme?

Ok, Cavey... but only because I think you're a really great guy... but I haven't got a new meme yet. You'll be first on the list next time!!