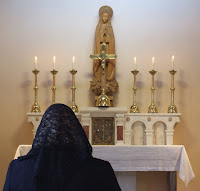 I do enjoy blogging. It's a whole new way to get to exchange information and ideas. This was really brought home to me at the Summer Session when I was introduced to several people by mutual friends as "Mulier Fortis"... and it turned out that they read my blog, although many don't comment, or blog themselves. I was delighted to meet up with Orthfully Catholic, but, since I only twigged who he was on the last day, I didn't get to buy him a pint. Anonymity has its drawbacks!

I was also told about many other good blogs people read - most of them were already known to me, but there were a few that I hadn't heard of. I shall explore further in due course. But two which came up in conversation a few times were both blogs by seminarians: Northampton Seminarian and East Anglia Seminarians. These chaps are the priests of tomorrow: they need our prayers and support, so pop over and say hi.

I also noticed a new blog in the com-box while I've been away: Philip Andrews writes a blog called "Carpe Canum"... my Latin is almost non-existent, and I somehow doubt that it means "grab the dog" so if anyone could enlighten me, I'd be very grateful!!
Posted by Mulier Fortis on 3.8.07

Well your Latin translation is just as off as mine: I think it means "Seize the Elderly", but that can't be right!
:)

I like blogs by Seminarians; Northampton Seminarian is good. :)

A quick google search suggests that it does indeed mean 'dog', as in the phrase "Multitudo canum, mors leporis".

Good to see you're back in action, Mac.

Well, maybe he has a secret with to be a dog-trainer!
:)

LOL. I hope it means 'Sieze the Dog'. Being a dog lover, I thought the play on words of sieze the Day and sieze the Dog might be a little different. What can I say... I love to cause confusion! ;-)

I'd come across Northampton Seminarian, but am now enjoying East Anglia Seminarians. Thanks for the post.