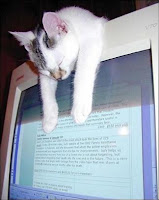 It has been nearly 2 years since I last posted on this blog. This post will be a sort of stream-of-consciousness affair, just to see if I can find the old blogging mojo - and also whether anyone is still bothering to read it!

I didn't know whether I'd ever get back to blogging, though I had no intention of deleting the blog itself - as I had explained to so many people before, the existence of links from other websites meant that, if I had deleted it, a porn site would probably take over the address. Occasionally I sent out a link on Twitter, or via email, if a question arose that I'd already answered. Without wanting to blow my own trumpet too loudly, I knew that I was reasonably good at writing, and some of my stuff had been entertaining and informative. It could get a little frustrating however, that, despite all the time and research I spent on my serious pieces, the stuff people really seemed interested in was the cat posts.

I used to complain that, when I had time to blog regularly it was because I was doing nothing worth blogging about. Conversely, when lots was happening, I didn't have any free time. The past two years have borne this out - lots happened, and I didn't have the time to blog. First of all, Fr. Tim became seriously ill and nearly died. He therefore retired as Parish Priest of Margate. Thanks be to God he survived, and went off to recuperate with his sister in Bournemouth. We will all have to watch his blog, the Hermeneutic of Continuity to see where he will fetch up next.

I continued to worship at St. Austin & St. Gregory's Church in order to help Fr. Bernard McNally - he was holding the fort by providing the Sacraments. Once a new Parish Priest was appointed, I gave him a bit of administrative support until he'd had time to settle in, and then switched to attending the Traditional Latin Mass at the Shrine of St. Augustine in Ramsgate. Six months without the Usus Antiquior was almost unbearable. I was very blessed to be able to find another regular one so near to home (the Isle of Thanet is not very big, and it takes me about the same time to get to Mass in Ramsgate as it did to get to Blackfen.)

Unfortunately for me, my own health took a decided turn for the worse. I lost my teaching post, and was told that my knee joints had pretty much collapsed, meaning that I would need knee replacement surgery - the left knee first. I am now having to use crutches to get about. It took a while to get onto the hospital waiting list - there were various administrative hurdles to be negotiated - but just before Christmas I was told that I had been successfully added to the list, and it would be about 6 months' wait...

...Only, unfortunately, the whole world suddenly found that it was being shut down due to a pesky little organism called COVID-19. All elective surgery has now been cancelled. The good news is that I had managed to sort out my registration as a disabled person before the rest of the country caught the virus and blocked the government phone lines, and also that my GP had finally recognised (from the X-rays and the description of the damage to my joints by the Consultant Orthopaedic Surgeon) that I was going to need something rather stronger than ibuprofen and paracetamol while I was waiting. Being on morphine has the added advantage of making my rather uneventful days positively zip by. I am doing a pretty good imitation of a cat. Apart from praying the Office, "attending" livestreamed Mass, checking Twitter and making something to eat each day, I spend most of my time napping.

Miaowrini seems happy enough with the current state of affairs. I'm home all the time, and so am available for the dispensation of treats (she loves Dreamies - I think they're called Temptations in the US) and ear-scritches pretty much on demand. She has me well-trained: she doesn't even have to miaow, she just stands and waits, looking at me expectantly. I'm such a wimp that I can't bear todisappoint such trust, and out come the treats. However, I'venoticed that she is getting fat, so I shall have to try and harden my heart against her blandishments. I can reduce the number of Dreamies dispensed at any one session anyway...

I've been through the health situation before - though it was just the one knee that time, with the added difficulty that the damage wasn't so clear on the X-rays, and it was suggested by some of the doctors I saw that the whole thing was actually in my mind. Not having to question my own sanity this time around makes it much easier to bear. However, the illness last time was the way God called me back to the Church. There is a little niggle in the back of my mind that there might be something equally earth-shattering around the corner this time too. Not sure if it's just for me (like before) or, given the weird stuff happening in the world (and the Church itself) just before this all kicked off, maybe it'll be even bigger.

May God continue to Purify His Church!

“ . . . there might be something equally
earth-shattering around the corner this time too. Not sure
if it's just for me (like before) or, given the weird stuff
happening in the world (and the Church itself)
just before this all kicked off, maybe it'll be even bigger ”.

If, in a year's time, Mac, you are Elected as the first female
Pope since Pope Joan (allegedly), you will have the answer.
You will also be the first Pope to have a Papal Cat
called Miaowrini.

Mac!!!! Great to see a blog entry from you, once I get better settled, I plan to start blogging again too.

Yaaay!! Welcome back to the blogosphere Mac! You’ve been missed, your voice is needed ... keep it up! God bless, A.E.xx

Welcome back! So happy to "hear" from you again, and that you got the help with the car via Fr. Z. Oremus pro invincem in these troubled times. Meows also from my three moggies.