Dave, a friend who knows my predilection for blonde jokes, sent me the following two nuggets: 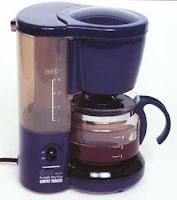 A newlywed blonde went to a store to ask how to operate the new coffeemaker received as a wedding gift. The salesman carefully explained how everything worked; how to plug it in, set the timer, go to bed, and upon rising, the coffee would be ready.

A few weeks later she was back in the store, and the salesman asked her how she liked the coffee maker.

"Wonderful!" she replied, "But... it's just awfully inconvenient to have to go to bed every time I want to make a pot of coffee."

Q: Why is the average IQ so high in Japan?

A: Have you ever seen a Japanese blonde?

I'm blonde. I find blonde jokes funny. Usually I'm feeling slightly smug, because we all know that blondes aren't really thick. But occasionally one of our number perpetuates the blonde myth...


Twitch of the mantilla to the Catholic Caveman.
Posted by Mulier Fortis on 27.8.07

What do you call an intelligent blonde? - A Golden Retriever.

I've yet to see one called "Rusty" either.

The Caveman says not... his wife comes from South Carolina. I don't think I'd want to argue with the Caveman!

I love it. And the audience clapped. (But then, she looked so sweet, I probably would have too if I'd been there)

haha! That video was too funny!

She didnt make any sense!

South Carolina started the Civil War too. I wouldn't assign great genius to that state.