With my cat fixation, no doubt I would have been burned as a witch back in the mists of time... but by the Protestant hordes rather than Catholic ones - it is my understanding that witch-burnings didn't really get under way until the Reformation, and they were by the secular authorities!

If you don't believe me, read the following quote from Jenny Dobbins, a historian (and herself a wiccan)...

"When the Church was at the height of its power (11th-14th centuries) very few witches died. Persecutions did not reach epidemic levels until after the Reformation, when the Catholic Church had lost its position as Europe's indisputable moral authority. Moreover most of the killing was done by secular courts. Church courts tried many witches but they usually imposed non-lethal penalties. A witch might be excommunicated, given penance, or imprisoned, but she was rarely killed. The Inquisition almost invariably pardoned any witch who confessed and repented."

Twitch of the mantilla to David (on whose site I found the quote.)

But I digress. Apparently there is some scare story out (at the Curt Jester's) and about (at Fr. Ray's) blaming the Catholic Church for killing black cats. The Italians are, according to some sources, very superstitious, and consider black cats to be unlucky. Now, maybe I have missed something here, but how, exactly, did "superstitious Italians" suddenly equate to "the Catholic Church"?

Nevertheless, I shan't be bringing any Italians home to meet Sylvester... just in case! 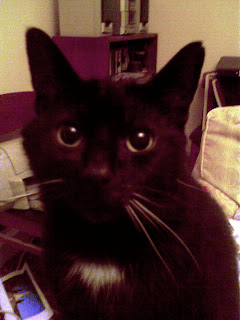 Holy dialated pupils, Batman! I have two black kitties! And I live in a very protestant place. I guess I'd better be careful. Oddly enough, here in Britain they consider black cats lucky?? That's so WOW to my American senses.