(Not So) Divine Office 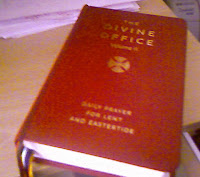 A while back, Fr. Paul, thinking in the depths of the Lune Valley, alerted the Blogosphere to the fact that Amazon were flogging copies of the Divine Office at knock-down prices. In case anyone is unclear, the Divine Office is not a local administrative enclave of the Holy See: it is the official Prayer of the Church. Also known as the Liturgy of the Hours, or the Breviary, it is compulsory for priests and religious to pray it daily (though some Religious Orders have their own versions of it) and many lay people pray some, or all, of it.

I have to admit that my first thought on reading Fr. Paul's post was entirely cynical: something along the lines of, Oho... so maybe they are going to do a revamp on the translations of the Office, and they're ditching the old copies before it becomes widely known...

My second thought involved checking out the Amazon website with debit card to hand. Fr. Paul had said that the volumes were being sold at £35 each. Not most people's idea of a bargain, I grant you. However, the books usually retail at £50... That's $98.3 dollars for my transatlantic buddies... and € 73.60 for my European friends (currency according to today's exchange rate.)

Now you might not think that £50 is too much to pay for a book. But, the complete Office actually has three volumes. And it is not £50 for the whole set, but £50 per volume... If you are obliged to say the Office because of your vocation, you cannot "get by" with only one volume, you have to have all three...

Even so, £150 for the basis of your spiritual life, for the rest of your life, doesn't seem too bad, does it? I mean, it's not as if you need to buy a new copy every year...

...Now, normally, I'd agree. Some things are worth spending money on. You get what you pay for, and good quality prayer books which will last a lifetime definitely fall into this category.

...in English-speaking countries, there is this little group called ICEL, and ICEL believe that it is vitally important that they defend the copyright on their (up to now) appallingly translated prayers. ICEL only give permission to one publisher (as far as I have been able to ascertain) to print the Office in England and Wales: HarperCollins have the monopoly. 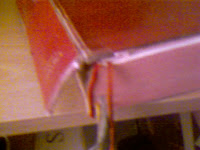 Monopolies have even less reason to produce goods of a reasonable quality. I was fortunate to have been given my first Breviary shortly after I returned to the Church (from an anonymous donor) and now, as I've taken vows, praying the whole Office daily is part of my rule of life. I keep the current volume of my Breviary in a special leather case which zips up. I am careful to treat the Breviary well: it is mostly Sacred Scripture, after all. However, the binding of the volumes is of such poor quality that I had to have one volume rebound after about two years, and I've been patching up the others with sellotape. Matters became critical when pages began fluttering to the ground every time I opened the book to pray... 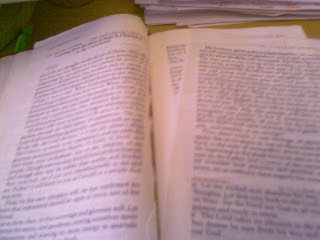 ...and then Amazon made its offer. Unusually, I had enough money spare to buy all three volumes, partly because one of the Amazon partners was offering the completely new volumes at an even lower price: I couldn't be certain that the prices would remain low, so buying them at intervals seemed to be a bad idea.

My old copy was a 1991 reprint of the 1974 version. The General Calendar has changed considerably, and there are lots of fascinating saints who have been added. Up until now, I've observed their feasts using the Common Offices (ie. Martyrs, Pastors, Virgins and so on) and I noticed that, in the advertising blurb, the publishers stated that the new 2006 reprint had an updated Calendar...

I was sure that at least some of the newer saints would have been included, and eagerly awaited delivery of the prayer books. Alas, only the dates of movable feasts have been updated: and the recent decision of the Bishops to move certain Holydays to the nearest Sunday means that these new calendars are now obsolete (Hehey! Now we know why the price has been slashed!!)

As well as not bothering to update the Proper of Saints, or even the General Calendar given in the front of the volumes, they haven't bothered to improve on the quality of the paper used. As you can see in the photographs, the paper is so thin that you can actually read the text on the other side of the page... 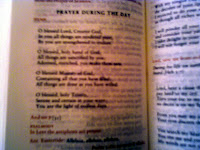 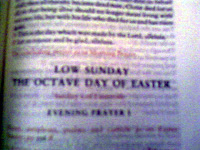 In all of this I take comfort from the fact that ICEL are upholding standards and not letting just anybody publish the Sacred Liturgy of the Church...
Posted by Mulier Fortis on 8.6.07

"ICEL are upholding standards and not letting just anybody publish the Sacred Liturgy of the Church..."

"ICEL are upholding standards and are letting somebody publish the Sacred Liturgy of the Church anyhow".

so, I pray what I understand to be an abbreviated Liturgy of the Hours, just the "main" hours. Lauds, Vespers and Compline.

According to the cover it says it is "The Liturgy of the Hours of the People" (meaning I assume the lay people)... am I praying the same thing as others?

Same prayers, Ali. Lay people are particularly encouraged to pray the hours of Lauds and Vespers as they are described as the "hinges" of the Litugical prayer. Lauds, Vespers and Compline fit into a single volume.

You aren't praying the Office of Readings (aka Matins) and the Hour of Prayer during the Day (Terce, Sext and/or Nones - some Religious orders pray all three, priests are obliged to pray only one of the three)

It's really the Office of Readings which takes up the extra space - two readings (each one a page or more) for each day of the year, plus alternative readings for the saints days...

I am impressed that someone has actually taken notice of my blog!

I think one of the great fruits of Vatican 2 is that so many have started praying the Divine Office.

There is something very comforting in the thought that, no matter how I feel personally at any one time, I am praying with the whole Church and it isn't dependent on me or how I feel.

And, of course, the Psalms express so many emotions and needs.

A subject close to my heart! I hadn't actually noticed half these annoying things about the Collins edition until you wrote about them. (Mind you, before then I had been using a contraband translation of the pre-Vatican II Breviarum Romanum.)

I love praying the office, although I've only thus far managed to consistently pray lauds and vespers, although depending on the day, I may try and fit in more hours. I make do with the one volume "Christian Prayer" which I was given for free.

I also love the fact that I'm praying along with the whole Church. Just as the Holy Sacrifice of the Mass is always being celebrated somewhere in the world, so too, the divine office is being prayed somewhere. I also love praying for the Church, for people I've never met, knowing that God will hear our intercessions and grant grace to those most in need.

As for the quality of the breviary from amazon, seeing through the pages would really really annoy me.

I am glad I can pray it in spanish, I got more options! ;)

Hi Ali. Which Spanish edition of the Divine Office are you using? The one from Spain or the one for Latin America? I pray the Latin American version and the 2-year cycle of the Office of Readings is offered, unlike the Collins and ICEL English versions, and even the Latin version. Is this what you meant by having more options from the Office in Spanish? Joe

Hello Ali. I have the same question as "anonymous". I am trying to purchase the 4 volume set of the Divine Office in Spanish for a friend who has permanent residence in Mexico. Is one Spanish edition better than another? Do you know where they can be purchased? I didn't see the Spanish version available from Amazon.com.

I own both the Daily Prayer and the Shorter Morning and Evening Prayer. I can only manage Lauds and Compline. I used to find Lauds difficult, due to time constraints but now I pray it before Mass on weekdays. I really want to buy the 3 volume set but just seems like so much money for them - which I don't have.