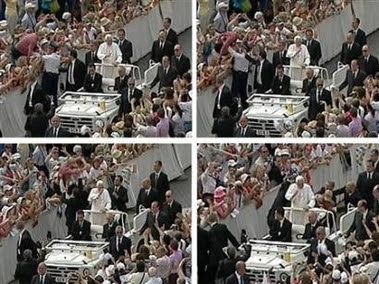 The Holy Father's General Audience today (June 6th) was nearly disrupted when a man jumped the barricades and attempted to get into the Popemobile.

The Holy Father was not injured (he hardly seemed to notice) and he continued with the General Audience as planned. The pope's bodyguards managed to wrestle the man to the ground.

Read more about it over at American Papist (he also has a video) and Fr. Z also has some information on how the Swiss Guards are finding the Pope's popularity hard work!
Posted by Mulier Fortis on 6.6.07

Definitely someone from the Latin Mass Society...nuff said :))