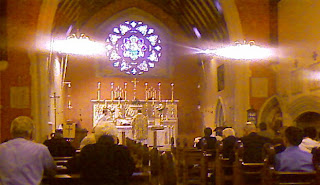 We didn't have a Corpus Christi Classical Rite Mass at Blackfen, on account of the Parish Priest abandoning us in favour of the Isle of Wight Latin Mass Society (heheheh... only kidding...)

However, Fr. Tim was careful to point out that there was going to be a Low Mass in the Traditional Rite at St. Mary's, Chislehurst. Fr. Charles Briggs was the celebrant. The silence and sense of the Sacred was awesome.

One of my friends has joked that there would be no point having a YouTube video of a Low Mass as the soundtrack would go something like this:

Huh! that soundtrack was on my blog a few weeks ago but without the "rustle", obviously the sound of polyester!
And you commented on it! Puh
:)
see you soon

Can I help it if both you and my friend have the same great idea?? And I have a memory like a sieve...
;-)

You mean to say Fr Tim can't bi-locate yet? Tut!

*smiles* There was a Tridentine Mass in town here, but I did not go. I know I would find it discombobulating to go to Corpus Christi (Tridentine) on Thursday and then Corpus Christi (Novus Ordo) on Sunday. I might try to explain in my post for Sunday.