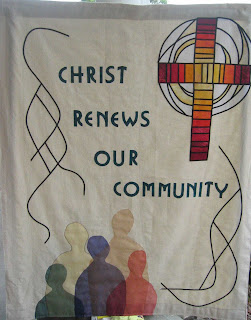 The Roving Medievalist has founded a new Order of Chivalry. The Militant and Just Bloody Rotten Order of the Torch exists in order to declare war on

"That disgusting relic of the fraudulent, defunct and stinking 'spirit of Vatican II'...."

otherwise known as the "felt banner." I have to admit to a deep loathing for those banners, and also for the limp rags passing themselves off as matching vestments.

"The picture should show you holding one of the misbegotten monstrosities in one hand and a fire-producing device in the other."

Actual incineration is not compulsory. Knights Companion just need to voice support for the Order. I'm restricted to applying for the latter degree of membership, as my PP appears to have removed any evidence of felt banners... if there ever were any in Blackfen, that is.

The motto of the Order is "The Seventies Are Over, Burn The Bloody Things!"

Pop over and indicate your interest HERE.


UPDATE: As I was one of the first ten to sign up, The Grand Master has made me an honorary Knight Commander. Heheheh...

*sighs* I know this is funny, but the wording confuses me into thinking they are calling Vatican II fraudulant, defunct and stinking. :(

no, Mark... it's not that the Spirit of Vatican II is fraudulent, it's an attack on the fraudulent spirit... ie the same thinking that declared that everything pre-Vat2 was bad, and that Latin and trad hymns and nice vestments had to be thrown out completely... and this thinking is typified by the ghastly felt banners (the relics that Jeffrey refers to)

I have no problem with Vatican II - my problem is the flawed way it's been interpreted.

Had to smile; the banner displayed makes the acronym CROC, which phonetically we around here would use to describe the poltergeist in question.