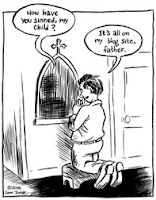 I saw this joke over at Vive Jesus! and couldn't resist snaffling it. However, to prevent a whole load of snippy comments about how this could never happen due to the Seal of the Confessional, blah, blah, blah... I took the liberty of doctoring the original a little...

A bunch of seminarians get to practice hearing confessions using each other as pretend penitents, with a priest sitting in on the sessions. The first seminarian hears several "mock" confessions, then the priest asks him to step out of the confessional for a few suggestions.

The priest tells the seminarian, "First, cross your arms over your chest and rub your chin with one hand." The seminarian tries this. The priest then said, "Right, got it... now try saying things like, 'I see, yes, go on', and 'I understand, how did you feel about that?'"

The seminarian repeats the phrases, trying them out. The priest then says, "Now, don't you think that's a little better than slapping your knee and saying, 'No way! What happened next?'"
Posted by Mulier Fortis on 22.5.07

The first time I read that I almost laughed out loud at work :)