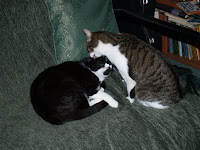 Stephen over at CSSML is still looking for a home for Harry and Boots. I'm getting twitchy, and they're not my cats, so heaven knows what Stephen is going through...

In a combox for one of his posts he wrote:

Hi Mac! No takers yet for moggies & I'm beginning to get a bit twitchy. I'm advertising all this week in the Cambridge Evening News and 10 local weeklies which at has at least prompted one call. The ad refers people to my other (single entry) blog site http://cathedralcats.blogspot.com

Prayers by one and all, please!!

PS Did I mention the reason I can't take the cats to Alton Abbey? It's not that they're mean, just that the Abbot recently took in a Devon Rex refugee. She was in a household of racist mogs who ganged up on her and the Abbot gave her sanctuary. On arrival at the Abbey she promptly disappeared - up the Abbot's chimney. I leave what was involved in the rescue bid to readers' imaginations. Given the colour of their habits, it's just a mercy Alton is not a Cistercian House. While I love my two chaps dearly, they're no saints and I have little doubt they too would gang up pretty effectively on any Devon Rex under the same roof.

At the very least, say a prayer that a good home can be found.
Posted by Mulier Fortis on 23.5.07

Thank you so much, Mac.

Since writing the piece I wrote the other day which you so kindly quote, there have been some more enquiries but no firm takers yet. So the ads are definitely at work.

I would take them in a HEARTBEAT if I were in the UK - they are adorable.
Can he run an ad in his church bulletin, or have the priest make an announcement?